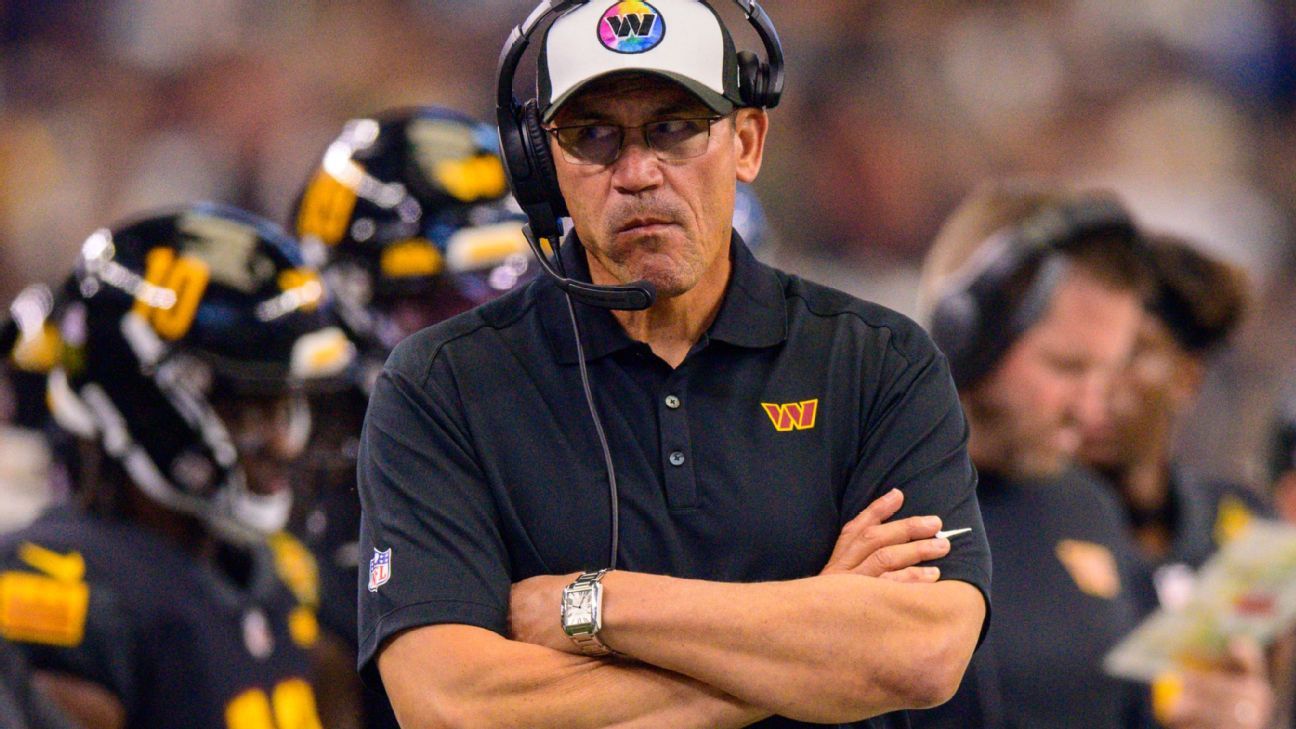 Washington Commanders coach Ron Rivera, in Year 3 of his tenure, said Monday if anyone thought it would be easy to turn around an organization with one playoff win since 2005, “They’re crazy.”

But having lost three consecutive games to fall to 1-3 — and with a 15-20 record since joining Washington — a fan base desperate for a winner might not be willing to give that to him. The Commanders already are three games out of first place in the NFC East — and two games out of third.

The Philadelphia Eagles (4-0) have a second-year coach in Nick Sirianni, while the New York Giants (3-1) have a first-year coach in Brian Daboll. Dallas’ Mike McCarthy began with the Cowboys (3-1) the same year Rivera arrived in Washington.

Since arriving in Washington, Rivera has dealt with a team name change, an NFL investigation into the organization based on activities that predated him and a Congressional inquiry into owner Dan Snyder, not to mention a DEA investigation into trainer Ryan Vermillion.

On the field this season, Washington is currently on its third center because of injuries. Running back Brian Robinson, expected to start, has yet to play after an August shooting incident but might debut Sunday — though the Commanders still had a 1,000-yard rusher in Antonio Gibson.

Defensive end Chase Young remains sidelined after tearing his right ACL in November and is at least a week away from returning. Because of injuries, the Commanders’ interior offensive line did not spend much time together in training camp.

Rivera said he tried to get across the lengthy timetable for a turnaround last season. He said he understands fan frustration but maintained the need for patience.

“Until we get to the situation and to the point where we really believe that this is what we need — everybody’s in place, everybody’s healthy, everything’s rolling — it’s not going to change,” Rivera said.

Washington won the NFC East with a 7-9 record two years ago. But the team went 7-10 last season; the Commanders were 6-6 when the pandemic and injuries decimated their roster.

This past offseason he talked about the importance of the third season and taking a jump.

“I respect their — their frustrations as fans. I get it,” Rivera said. “This organization’s got five championships. You f—ing kidding me. I get it. I understand how important it is to win, OK? But I’ve got to be realistic with what we have and what we’re going to do.”

Washington traded two draft picks to the Indianapolis Colts in the offseason — a second-rounder in 2022 and a conditional pick in 2023 that likely will be a second-rounder — to acquire Wentz.

In the season opener, he threw four touchdown passes in a 28-22 win over the Jacksonville Jaguars. He tossed three touchdowns the following week in the second half of a 36-27 loss at the Detroit Lions.

Over the past two games, Washington’s offense has managed just 18 total points, as Wentz has thrown one touchdown and two interceptions and has lost a fumble. He has been sacked 11 times in those defeats and an NFL-high 17 times for the season.

He had a combined QBR of 54.6 in the first two games and 13.3 in the second two. The line issues have led to protection problems — compounded if he doesn’t throw to his first or second read — and, therefore, a struggling passing game. Wentz is averaging 6.04 yards per pass attempt, the second lowest of his career.