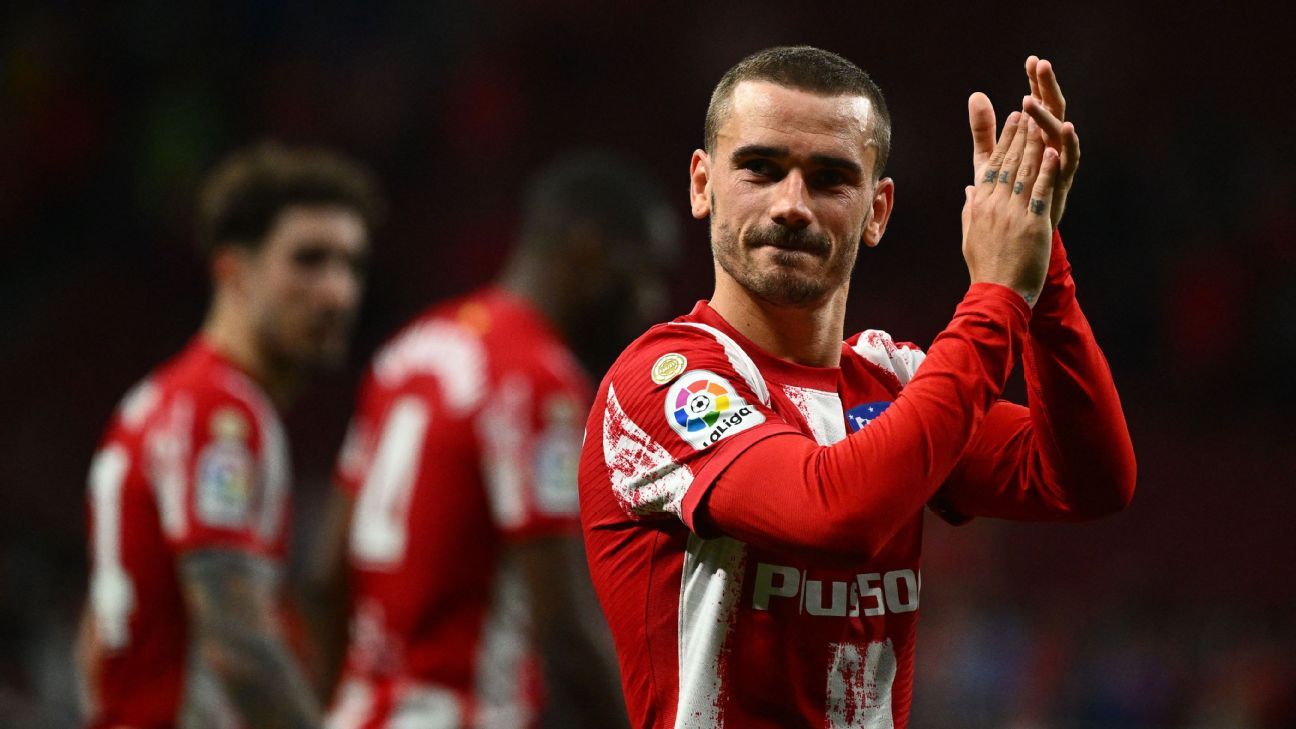 Luis Suarez didn’t wait, and he didn’t look back. At the end of Atletico Madrid‘s visit to Elche on Wednesday night, he headed straight down the tunnel, still annoyed that the goal he’d scored was ruled out. He had felt like he needed it — a little vindication at the close of a difficult season, a reminder that he was still here. He had started just one of the past five games, and his last goal was against Alaves seven matches ago. In recent weeks, he has rarely got off the bench. This year he has scored half as many as he did last season, when he led Atletico to the LaLiga title.

He is still their top scorer.

Suarez has 11 league goals, the same number as Angel Correa, who somehow never really feels like a starter. Matheus Cunha, signed in the summer, has six. Joao Felix — who, at a transfer fee of €126 million, is the most expensive player in club history, and the man coach Diego Simeone says he will keep on even if Joao keeps getting angry with him in the hope that one day he will put it together — was out injured. He has eight. Marcos Llorente, scorer of 12 league goals last season, in double figures for goals and assists, doesn’t have any at all.

Antoine Griezmann, home again after walking out to join Barcelona a year later than he had initially thought, hadn’t scored since January, when he found the net against third-tier Rayo Majadahonda in the Copa del Rey. “It’s my fault, I accept that,” Griezmann said. “The goals will return.” They’re going to have to. In his last spell at Atletico, he scored 25, 32, 26, 29 and 21. He now has eight. He hasn’t got any in LaLiga in 2022, racking up a total of three league goals all season.

The summer’s other big signing, midfielder Rodrigo De Paul, did score on Wednesday. It was his second goal, and if he isn’t there for that — much as he got nine, seven and nine in his last three seasons in Italy — nor has he found a natural place yet.

And yet this season Atletico have actually scored more goals than last year. “Incredible,” Simeone called it, and it is in the most literal sense: watching them, it’s hard to believe. It’s the kind of statistic that had you checking the numbers because it doesn’t seem to make sense; it doesn’t tally with the eye test. And then you see that they have also conceded more. A lot, lot more. They’ve allowed 41 goals against, compared to 25 last season. It’s their worst figure in the past decade.

A week ago, everyone was banging on about Atletico Madrid doing a guard of honour for Real Madrid, the recently crowned league champions, as tradition suggests. The debate became tiresome and affected, as these things tend to, and in the end Atletico did not stand there and applaud Real Madrid onto the pitch, announcing in advance they were not going to participate in what they said had become a pantomime.

Instead, they just played. They beat Real Madrid 1-0, too, although the smiles and the jokes and the starting XI — no Thibaut Courtois, Karim Benzema, Luka Modric or Vinicius Junior — underlined that, for their neighbours at least, it didn’t matter much.

For Atletico, it mattered a lot, just not for the reason it might have done. Should have done, perhaps.

It was the first derby they had won in eight tries, and the first ever at the Metropolitano; their last win, in 2015, had been at the Vicente Calderon. A run broken at last. But this could have been a title decider, and it wasn’t. Atletico Madrid versus Real Madrid with four games to go. Never mind whether you actually do the pasillo; a bigger issue is that fact that you’re in a position where you might be expected to, the league title race lost five weeks before the end.

Atletico were always the team that could defend, but they could not defend their league title. It’s hard to remember a title defence so poor, in fact. It was over almost before it was done, part of their problem seemingly the very fact that they were champions.

Even when they were top after six weeks, Simeone admitted “we’re not where we want to be.” Something was not right, something had shifted. “We need a change of attitude,” Mario Hermoso said, and that was after a victory. “Everyone wants to win, to lift trophies, but for that to happen there are loads of things that have to happen first. Preparation, training, attitude — that’s the foundation on which success is built,” he admitted. Look at their results against the bottom three alone: 14 points dropped, enough to put them top.

Later in the season Jose Gimenez would admit that “when you win the league, lots of teams relax because they say, ‘Well, it’s happened.'” Simeone said: “For a team like Atletico, it’s not easy to be champions; it’s a club not used to being champions every year.” A week ago, Jan Oblak said he didn’t understand what was happening to them, where their heads were, “because it’s certainly not on the pitch.” On Wednesday night there was a “discussion” between him and Renan Lodi.

By the time the derby came around, the league was long, long gone. It had definitively slipped them by in December, when they lost four in a row. Now they are 14 points behind Real Madrid, having played a game more.

In the summer, when Simeone was trying to persuade Griezmann to come home, he suggested that with him, Suarez and Felix, this team could even win the Champions League. Instead, they were knocked out in the quarterfinals. They took Manchester City to the line, might have won it and probably should have, but they were knocked out again. The idea that they were unlucky is undermined by this simple fact: they didn’t win a single game at home in the competition. In the Copa del Rey, they were knocked out by Real Sociedad, 4-0.

“All sorts of things happen in a season,” Griezmann said on Wednesday. Atletico’s strongest-ever squad (or so everyone thought) did not compete as it should. There was a sense of lost identity all year, a recurring theme going back some time now. They had a team that changed weekly. There were injuries, too — Stefan Savic and Gimenez especially — and departures. Kieran Trippier left; Daniel Wass, who was signed to replace him, has played just 45 minutes. Nothing was ever really right.

Simeone admitted that he had found himself in a position that he had never experienced before in 10½ years at the club. This was “for sure our hardest season,” he said. Some things, though, do not change. In Atletico Madrid’s worst campaign, on Wednesday they secured Champions League football for next year. And if you’re saying, “so what?” you would be right to. So they should do. Just look at the squad, look at what it cost to assemble. This is the least you could expect. Well, it is now, and that’s the point. With Simeone, this has become standard, a minimum requirement, the coach in part a victim of his own success, which becomes self-perpetuating. And which absolutely must be sustained.

After Atletico were beaten by Levante, Simeone had a meeting with the club’s CEO Miguel Angel Gil Marin and the sporting director Andrea Berta. That was followed by a meeting with the playing staff, in which they were handed a stark message: if you do not reach the Champions League, it’s your contracts that are at risk. We will not be able to pay you. Atletico won the next six games, before that second loss to Mallorca. Champions League qualification was necessary to keep growing and just to keep their players; they had budgeted for it. It becomes mutually dependent, a circle: football success prompts growth at all levels, which allows for more football success, which allows for … and so on.

It wasn’t always so, and there has to be a starting point.

“When I came, they asked for four or five Champions League qualifications,” Simeone said. It was needed to build, to consolidate and to compete. Forget four or five: next year it will be 10 in a row. Every single full season in which Simeone has been there, a routine, a basic standard made of something that that was not a certainty, that back then was celebrated as a success. On his 400th league game as Atletico Madrid coach — seven off the club record — his team qualified for the competition for a tenth consecutive season. He and Luis Aragones have taken charge for 807 of 2,802 Atletico games in the first division between them; the other coaches average 32 each.

In their worst year, they did something they would have celebrated once, something that might just have others thinking: “not them again,” but they’re not going away. There was a moment seven or eight years ago, after a game at Atletico’s old Calderon stadium — gone now, razed to rubble to leave a motorway running right through the middle of the pitch — when a defeated coach from another one of Europe’s biggest clubs came through and gestured towards the pitch. “What a horrible team, that lot,” he said, and now they’re back.