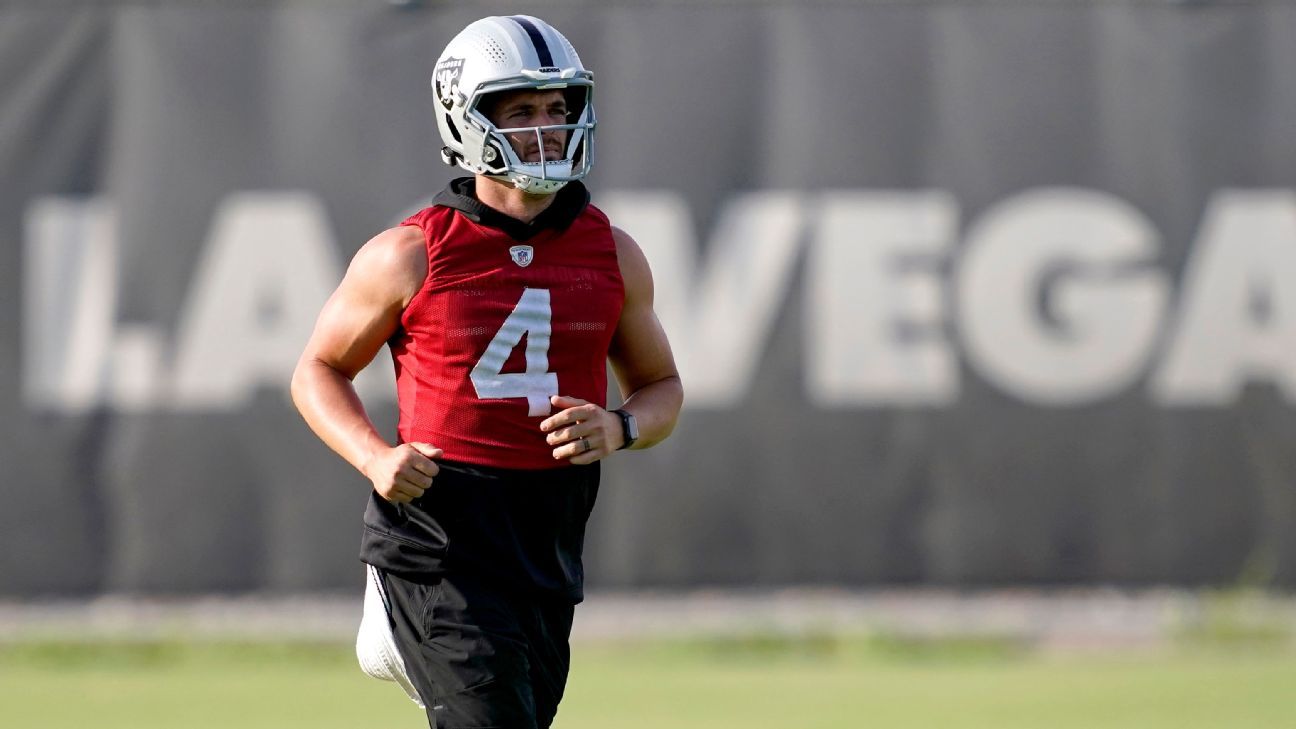 “I’d probably quit football if I had to play for somebody else … I’d rather go down with the ship, if I have to.” — Las Vegas Raiders quarterback Derek Carr

For one, the Raiders franchise quarterback demonstrated an undying loyalty to teammates, coaches, the front office and fans alike. That, in turn, elicited fawning responses from his already-faithful faction.

For another, the veteran of so many offseason trade rumors torpedoed his own trade value with his decree. As in, why would another GM want to engage in trade talks for a guy who says he’d rather quit than play for them?

Talk about a daily-double, eh?

But in such an offseason of discontent for so many “name” quarterbacks, from Deshaun Watson to Russell Wilson to Aaron Rodgers (all of whom, by the way, were linked to Las Vegas at one time or another), Carr has stayed the course.

The nominations for the 2021 ESPYS are full of NFL players. Cast your votes today.

Best Breakthrough Athlete
• Herbert and Young among the nominees

Not one to publicly complain or make excuses, his camp of fervent supporters has instead presented the case. With aplomb. The team has a terrible defense and if you give him a decent ‘D’ Carr will take the Raiders to the playoffs, they exhort. It’s a young and inexperienced receiver corps, blown up the past two years by Antonio Brown and Tyrell Williams, they fume. Jon Gruden’s offense is too old, predictable and old school, they lament.

But now, with the arrival of new defensive coordinator Gus Bradley, the architect of the Seattle Seahawks‘ Legion of Boom, the defense has been addressed. The receiving corps is a year older and Henry Ruggs III is ready to take that next step with additions in John Brown and Willie Snead IV. Darren Waller is a premier tight end and running back Josh Jacobs, like Waller, is a Pro Bowler and has a pair of 1,000-yard rushing seasons to start his career, not to mention newly-signed Kenyan Drake ready to spell him.

So, the thinking goes, Carr is out of excuses (real and imagined). Finally. And we really, truly, absolutely, no-doubt-about-it mean it this time.

Yeah, a unit that doesn’t quite jell under offensive line coach Tom Cable and puts Carr on the run would provide him and the Raiders with another out.

But of course, it’s still only June, right?

“Really, during the season when Rodney would [not] practice on Wednesdays, I was with Andre anyway,” Carr said of the traditional vet’s day off during last week’s mandatory minicamp. “Andre started a game for us, and Andre is a good player. Obviously, time will tell for him, what he’s going to be. And he’ll let his play do that talking, but he’s a heck of player and I’m excited about him.

“Trust-wise, we’ve had a lot of injuries on our offensive line throughout the years, so I’ve played with a lot of these guys already. It’s not like I’m looking at new faces that I’ve never seen before. I’ve played with these guys. Especially with the caliber of players they are. They’re really good football players and we have coach Cable. He’s going to make sure we’re ready to play.”

Carr just turned 30 on March 28. He is entering the penultimate year of the five-year, $125 million contract extension he signed on June 22, 2017 that made him, for more than two months, the highest-paid player in NFL history. And all of the guaranteed money from that deal — $70.2 million — is paid out.

So yeah, another offshoot of Carr’s decree could have been this: He is, understandably, angling for another extension.

What you need to know about the Las Vegas Raiders:

“Derek Carr is very cerebral,” Drake said. “Obviously, he’s been in this offense for a while, this league for a while. Arm strength is uncanny. Real, real just keen leadership skills and really commands the attention and respect of everybody in the huddle once we get in there. But also, is a real chill, laid back guy.

“I’ve been to his house, met his family, had a cookout with him and a few other teammates. He’s just a real open person and player. So, it’s really cool to, from afar, see how he is and how he manages the team and the team’s success. But up close and personal, definitely respect the guy and want to continue to see how far we can take this ride this year.”

Drake is not the only one. Obviously.

“We’ve added some pieces in the whole organization that I believe give us a really good chance to win,” Carr said. “I think [general manager Mike Mayock and Gruden have] done an excellent job of getting people that — I said it last year — love football. … This is the ultimate team sport, everybody has to be on the same page, everybody has to be moving in the same direction. We have a group of guys that do that, and we’ve added more talent.

“I keep seeing, you know I love, absolutely love, [reports that] we had the worst offseason, all that kind of stuff. Time will tell. We’ll see. But we believe that we’ve gotten better, and we believe that we’re progressing. It’s an exciting time for me. I’m just going to keep downplaying it because I just get tired of talking about it. I can see it, but we have to go do it.”

And without any excuses. No matter who makes them.