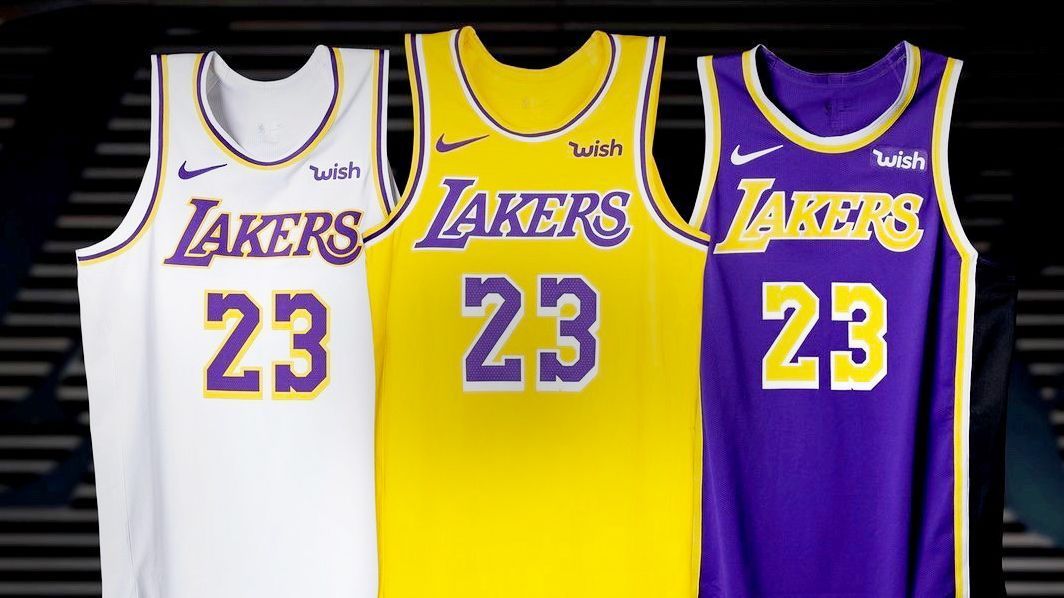 The Los Angeles Lakers are bringing back Showtime — sort of.

The team’s new uniforms, which were unveiled Tuesday, are a modified version of what the Lakers wore during their 1980s Showtime heyday — the latest evolution in the franchise’s storied visual history.

The new design was hinted at by a series of retail merchandise leaks, which turned out to be accurate. Here are the most notable changes to the jersey, one design element at a time:

The collar and armholes

Last season the Lakers wore a wishbone-style collar. They’ve now gone back to a traditional scoop collar — a big improvement. They’ve also changed to the piping on the collar and armholes to something close to the old-school Showtime style. Grade: A

The flat white numbers that the Lakers had used since 1999 have been replaced by purple block-shadowed numbers that evoke the team’s old design. But the new block-shadowing isn’t as strong or as distinctive as the older version — it’s sort of a halfway version that doesn’t feel as satisfying. Grade: B

In the Showtime era, the Lakers had contrast-colored side panels on their shorts. In 1999, they added matching side panels to their jerseys. Now they’ve eliminated the panels on the jersey — except for their purple jersey which now has a black side panel.

Ditching the panels on the gold and white jerseys is a classic case of addition by subtraction, but the black panel on the purple jersey is a misstep: It feels inconsistent, plus it’s the kind of BFBS move (that’s “black for black’s sake,” for those of you who don’t speak uni) that feels badly dated. Grade: B+

Those are the most significant changes. Overall, it’s an upgrade, although not as good as it could have been.

Additional information and photos of the new uniforms are available here.

Paul Lukas is glad the Showtime-era Lakers didn’t have to wear a uniform manufacturer’s logo or an advertising patch on their uniforms (and wishes the current Lakers didn’t have to wear them either). If you like this column, you’ll probably like his Uni Watch Blog, plus you can follow him on Twitter and Facebook and sign up for his mailing list so you’ll always know when a new column has been posted. Want to learn about his Uni Watch Membership Program, check out his Uni Watch merchandise, or just ask him a question? Contact him here.