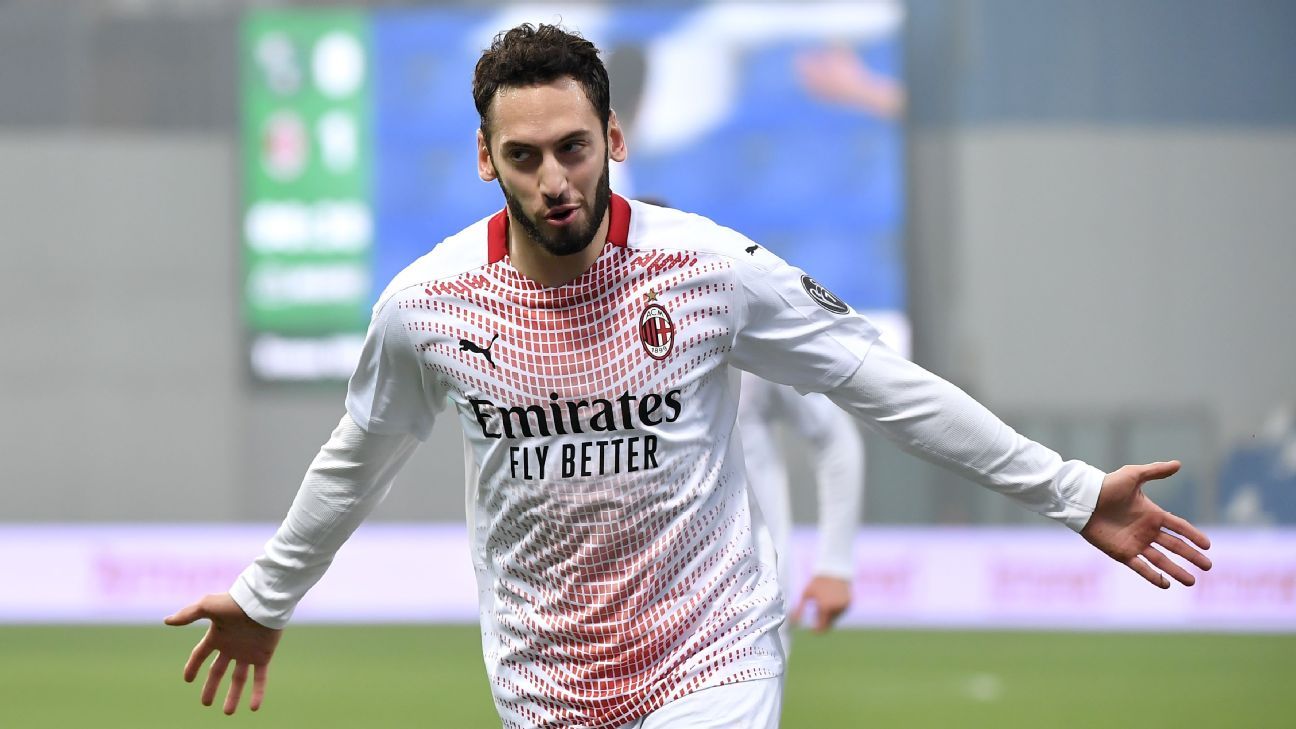 The January transfer window may seem like a distant memory, but that doesn’t mean the rumour mill has shut down! Speculation over summer moves is heating up, so check out the latest gossip below, and see all official deals here.

Sky Italy is reporting that Arsenal and Chelsea are in a battle for Turkish attacking midfielder Hakan Calhanoglu in the summer.

The 27-year-old is almost out of contract, with AC Milan still aiming to offer the player a new deal, but the two parties are reportedly at a stalemate with the player demanding more of a fixed contract than the Rossoneri are willing to offer.

Milan are believed to have offered wages of £66k-a-week, but the Turkey international is keen to want in excess of £82k-a-week.

Calhanoglu scored for country in a 3-3 draw against Latvia in the last international break and with the European Championship finals on the horizon, his stock could still rise. He has made 163 appearances for Milan and has scored seven goals and added 11 assists in 34 games this season.

Reports also suggest that Juventus are keen on the player should he become available in the summer and could offer more from a monetary standpoint than the two London clubs.

– Andrea Pirlo outlined his intentions to keep striker Paulo Dybala at Juventus in a postmatch interview following a 2-1 victory over Napoli, says Calciomercato. The 27-year-old Argentine played a crucial role for Juve — scoring his side’s second — in the win that saw the club move up to third in an all-important Champions League qualification battle. Dybala still has one more year on his contract in Italy, but clubs could soon be circling should he run down his contract.

– AC Milan met with Lorenzo Insigne‘s agent according to reports from Gianluigi Di Marzio. The Napoli captain has one year left on his current deal, but is set to sit down with the management at the end of the season to discuss the possibility of a renewal. The 29-year-old Italian forward has been at Napoli since his youth career in 2006, scoring over 200 goals for the club. It is suggested that the captain’s intentions will be clearer come the conclusion of the current Serie A season.

– Leicester City will not be signing Cengiz Under on a permanent basis come the end of the season, according to reports from the Daily Telegraph’s John Percy. The loanee from AS Roma came with a £20 million-plus transfer option in the summer but, after making just nine appearances in the Premier League this season with a spell on the sidelines, the Midlands club are not set to trigger the sign-on clause for the 23-year-old.

– Celtic have identified 29-year-old Josh King as an option to replace Odsonne Edouard this summer according to The Sun. The Norway striker joined Everton

– Chelsea, Barcelona, and Manchester City are in a race to sign Belgium and Internazionale frontman Romelu Lukaku this summer, according to Calciomercato. For Manchester City, it would be a move forced due to the loss of Sergio Aguero, who will leave at the end of the season. City had reportedly made a move for the striker last summer. Barcelona would see Lukaku, who scored on Wednesday in the runaway Serie A leader’s win over Sassuolo, and old boss Ronald Koeman reunited — the duo crossed paths at Everton in 2016-17. However, it is believed Chelsea are in the best financial position to win the race for 27-year-old Lukaku, who made 10 league appearances for the Blues in his previous stint from 2011-2014.