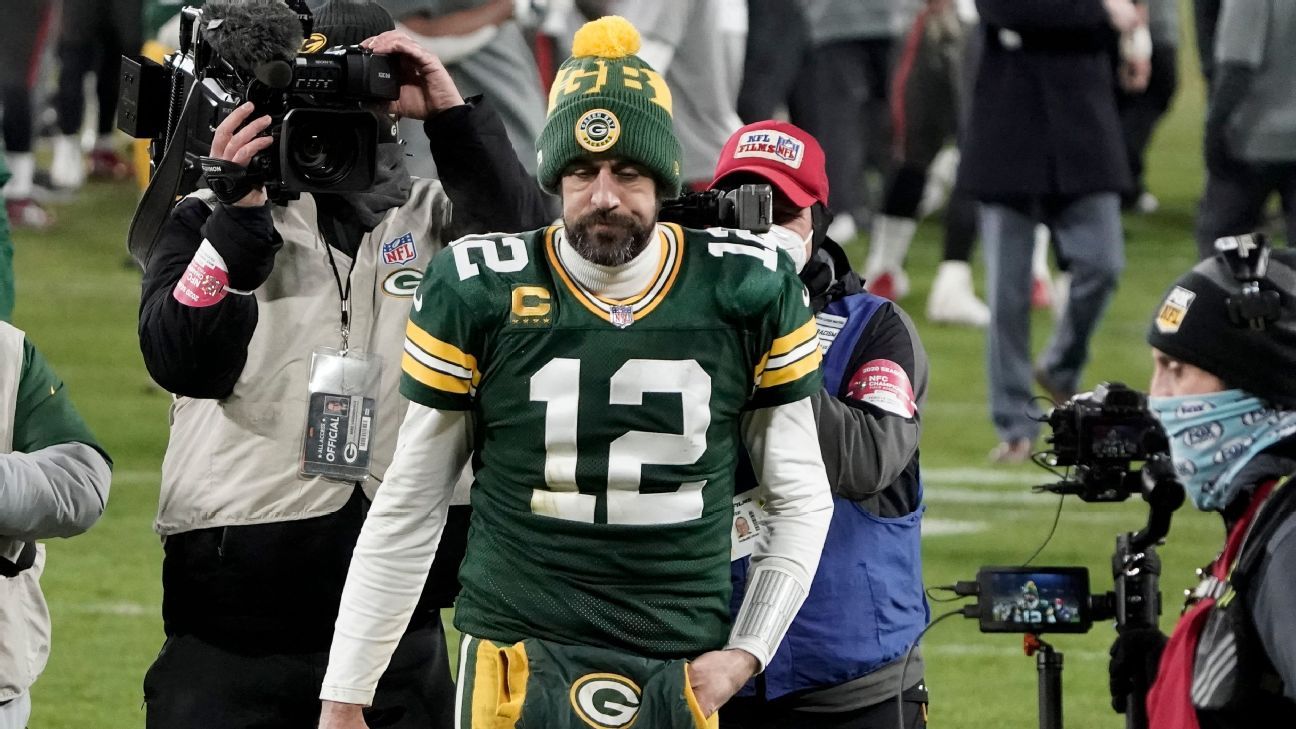 GREEN BAY, Wis. — Aaron Rodgers‘ comments after Sunday’s NFC Championship Game loss turned the Green Bay Packers‘ offseason into a watch party that could last until the 37-year-old quarterback shows up for the offseason program — if there is one — or the start of training camp.

In one videoconference, he flung open what previously had been just a small window of possibility that he would not be back next season with the only team he has ever played for in his 16-year NFL career.

The money quote from Rodgers — after he put himself in the category of guys with “uncertain” futures — was this:

“There’s a lot of unknowns going into this offseason now. I’m going to have to take some time away, for sure, and clear my head and just kind of see what’s going on with everything. But it’s pretty tough right now, especially thinking about the guys that may or may not be here next year. There’s always change. That’s the only constant in this business.”

While coach Matt LaFleur responded to that by saying “he better be back here,” there’s plenty to sort through when it comes to Rodgers’ future with the Packers.

Here are some answers to the questions facing Rodgers and the Packers, based on season-long observations and conversations with those close to the situation:

Players all want to control when the end comes for them, and Rodgers admitted last spring after the Packers drafted Jordan Love in the first round that he lost some of that control. So yes, he has serious questions about his future in Green Bay. When he called his future “a beautiful mystery” last week, he left things open-ended when it came to the 2021 season.

He has never mentioned the word retirement, and he hasn’t publicly changed his stance about wanting to play into his 40s. After last year’s NFC Championship Game loss, Rodgers talked about how the window to win another Super Bowl remained open. That never came up on Sunday.

It could have been the frustration over another conference title game loss — his fourth in a row in such games — but those who have been around Rodgers for any significant length of time know he rarely, if ever, says anything that’s not well thought out.

Does he want out?

Like Brett Favre, who waffled annually about retirement toward the end of his career, Rodgers wants to be wanted. It’s human nature. While LaFleur said he wants to roll with Rodgers as long as possible, Rodgers has reason to wonder whether that’s more than a year-to-year situation.

Adam Schefter and Pat McAfee get fired up over Dan Orlovsky refusing to believe Aaron Rodgers will leave Green Bay.

If Rodgers doesn’t want to live season to season wondering if each year will be his last in Green Bay, then perhaps he’s looking for the Packers to recommit to him.

Yes, he has a contract that runs through 2023, but they could make it clear that he’s not just living year to year by restructuring his deal. They could throw more guaranteed money at him — he has none left on the $134 million extension he signed in 2018 — to let him know he’s their guy beyond just the 2021 season.

They could also help their salary-cap position with a restructured deal. They could turn base salaries into signing bonus money, which then could be prorated over future seasons for salary-cap purposes.

Are the Packers ready to move on?

Access elite coverage for every fan: highlights of the biggest games, original series from NFL legends, unprecedented analysis and more. Sign up now to unlock everything ESPN+ has to offer.

General manager Brian Gutekunst worked under Ted Thompson, who drafted Rodgers and then traded Favre in 2008 when Favre wanted to unretire. Gutekunst admitted shortly after he took over in 2018 that he knew part of his legacy would be tied to whether he could find the next franchise quarterback who would continue the decades-long greatness and stability the Packers have enjoyed at that position.

If Gutekunst still believes Love is that player, then perhaps he would sacrifice the immediate future rather than sticking with Rodgers for another season or two. Of course, Gutekunst could squash any notion of that by saying Rodgers is the quarterback not only for next year but for the foreseeable future as long as his play doesn’t decline. Gutekunst is expected to speak with reporters by the end of the week.

Who has the leverage?

Rodgers, especially after he wins his third MVP in a couple of weeks. Yes, the Packers technically control him for three more seasons, but he can easily force their hand by asking for his release or a trade. Look at what Deshaun Watson has done with the Houston Texans. Players used to have little control in the NFL, but it’s becoming more of a players’ league than ever before in terms of leverage.

What could the Packers get in return?

Sources around the league don’t believe Rodgers is on the trade market at this point, but if Rodgers asks for a trade, the belief is that a team — or teams — would be willing to part with a first- and either a second- or third-round pick for Rodgers.

A Watson trade could help set the market as well, but the expectation is that the Texans would be able to land more than what Rodgers is worth given that Watson is 12 years younger.

What are the financial ramifications?

Given all the incentives Rodgers reached this season, his cap number for next year jumped to $37.572 million, an increase of about $1.22 million. That means the Packers would save a little more than $6 million in cap space if they moved on by either trading or releasing Rodgers this spring.

They would count $31.556 million in dead money on their cap. If they made either move after June 1, their savings would be more than $23 million. Rodgers has a roster bonus of $6.8 million due on the third day of the league year this March. That’s the only lump-sum payment he’s owed on the rest of his deal. The rest is in base salaries, weekly bonuses and incentives.

Nothing he has shown, at least publicly, would suggest that. But that’s no surprise given that he has taken third-string reps going all the way back to training camp. Reporters are allowed to watch only one period of individual or group drills during practices. But even during those viewing sessions, Love has struggled with accuracy — in the drill where quarterbacks throw to a stationary target (usually a net) and to players running routes on air (without a defender).

Backup Tim Boyle would be more suited to play in 2021 than Love. There’s also the possibility that the Packers could trade Love like the Patriots did with Jimmy Garoppolo. That would be one way to tell Rodgers they’re committed to him long- term, and then they could try again with another quarterback in a future draft.