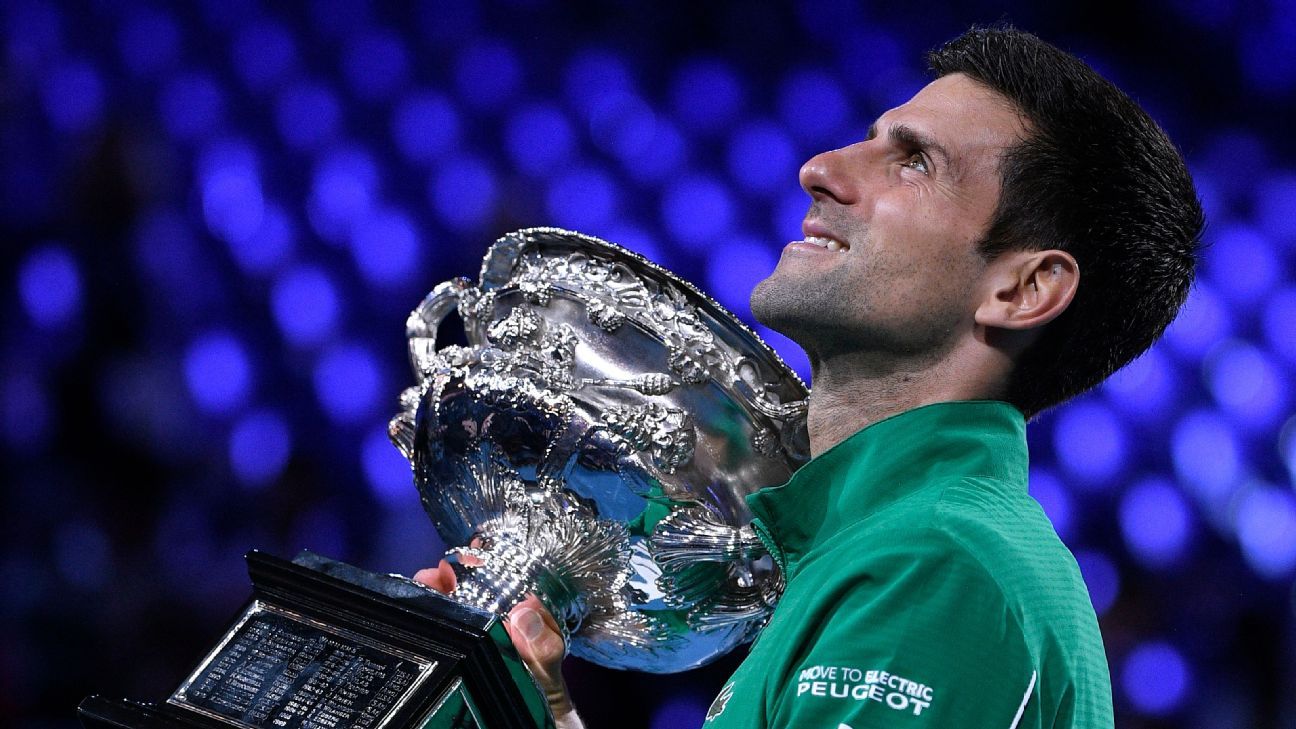 “I believe I can win the most Slams and break the record for longest No. 1. Those are definitely my clear goals.”

That’s what Novak Djokovic said on “In Depth with Graham Bensinger” last week. It was a pretty innocuous comment, especially by Djokovic’s standards, but it made waves in allowing us to further a debate that has been ongoing for years.

For about the past decade, we’ve been living through the most incredible three-way race tennis has seen. After Roger Federer won 15 of 25 Grand Slam tournaments from 2003 to 2009, breaking Pete Sampras’ career record before Federer’s 28th birthday, it appeared as if he was about to not only break the all-time record, but park it so far out on the horizon that no one could ever catch him. Then, Rafael Nadal began to reel him in, winning three Slams in 2010 and nearly every French Open since. Finally, Djokovic figured out the perfect mix of fitness and tenacity to get past Nadal, winning three Slams in 2011 and five of six in 2015-16.

The three are now first, second and third on the career Grand Slams list: Federer with 20, Nadal 19, Djokovic 17. They have combined to win 56 of the past 66 Slams, and over the years, each has put together “greatest of all time” credentials for fans to debate.

It’s a nearly perfect debate, but only for now. The odds of Djokovic eventually blowing past both Federer and Nadal in most categories are pretty good.

Djokovic’s Australian Open win in January brought him to within three of the career lead, and Wimbledon’s 2020 cancellation effectively eliminated Federer’s best shot at a 21st title. (Since Djokovic has won two of the past three at the All England Club, it probably hurt his quest a bit, too.)

If both the US Open and French Open actually take place this fall as currently scheduled, Nadal will have an excellent shot at tying Federer by the end of the year. But Djokovic would be the betting favorite at the US Open, and he could certainly be at 18 (or possibly 19) by the end of 2020, as well. If Djokovic were to take both titles, the race would be all but over.

Between injuries and the fact that his best surface (clay) isn’t featured as much as hard courts on tour, Nadal has lagged behind both Federer and Djokovic in this race. With 209 weeks at No. 1, he’s more than a year behind the top five.

Federer’s unholy dominance in the time before Nadal’s and Djokovic’s respective peaks shines through here. He topped the ATP rankings for 237 consecutive weeks between 2004 and 2008, then padded his career lead by taking over again for nearly a year in 2009-10 and in brief stints in 2012 and 2018.

Before tournaments stopped in March, though, Djokovic had been No. 1 for 59 of the previous 72 weeks. And in the current rankings, only Nadal could provide a threat anytime soon. Djokovic had the most points and was in by far the strongest form.

As the defending champ at both the US and French Opens, Nadal also has a lot of points to defend this fall if, again, things go on as scheduled. And depending on what else does or doesn’t get rescheduled, Roland Garros could be the only clay event remaining in 2020. That can only help Djokovic’s cause. He trails Federer by 28 weeks, and it’s quite possible he matches exactly 28 weeks after the clock restarts.

When Djokovic is on his game, it’s easy to assume everything is mere formality. It’s easy to see him winning the next three Slams to tie Federer at 20 and remaining far and away the No. 1-ranked player for 28 weeks to catch him there, too.

None of this felt like a formality two years ago, though.

In May 2018, Djokovic fell to 22nd in the ATP rankings. He missed the second half of 2017 due to a long-lingering elbow injury, and while he returned for the 2018 Australian Open, he lost in the fourth round and underwent another surgery. From 2016 Wimbledon to the 2018 French Open, he reached only one Slam final. He returned to the ATP Tour in March of 2018 but was far from his top form and allegedly told his wife he was ready to retire.

Meanwhile, the tennis world was moving on without him. Nadal and Federer were still the top two, 27-year-old Grigor Dimitrov was up to fifth and appeared to be reaching his prime, oft-injured Juan Martin del Potro was healthy and back up to sixth and, perhaps most scary, the next generation of stars was approaching. Alexander Zverev was up to No. 3 at age 21, while 24-year-old Dominic Thiem was eighth and would soon reach the French Open final.

Djokovic rebounded, of course. He reached the 2018 French Open quarterfinals, then won an unexpected Wimbledon title. That kick-started a run of five titles in seven Slams. It might take another injury to knock him off track, but he was a virtual nonfactor on tour for most of two years. That period served as a clear reminder of both what it takes for him to reach his top form and how long it takes to return to said form if he picks up a knock. Plus, he’s about to turn 33. Each injury could take longer to recover from with age.

The next generation up for the challenge

There’s also something out of Djokovic’s control: the level of competition.

A sport produces cycles or generations of athletes, and the one that followed Nadal and Djokovic failed to challenge the Big Three (or four, including Murray) in any meaningful way. Marin Cilic, Kei Nishikori, Milos Raonic and del Potro remain dangerous when healthy, but injuries have been constant issues — especially for del Potro, the most dangerous of the bunch — and they have combined for just two Grand Slams between them. There’s nothing saying steadily healthy versions of these players would have ever knocked the Big Three off of its collective perch, but they could have at least won a few more head-to-heads in Slams and changed the career race a bit.

Granted, three-time Grand Slam champion Stan Wawrinka didn’t find his best form until he was nearly 29, so it’s possible that a player in his upper 20s still has time to break through. Thiem, for instance, has reached two French Open finals and has beaten Nadal three times on clay in the past three years. If he were to finally end Nadal’s Roland Garros reign, that clears the deck a bit for Djokovic. But if there is to be a sustained assault on the Big Three, it will likely come from the latest generation of potential stars.

Daniil Medvedev (currently No. 5) reached the US Open final last year and stretched Nadal deep into a fifth set. Stefanos Tsitsipas (No. 6) reached his first Slam semifinal in the 2019 Australian Open, won the ATP Finals and beat each of the Big Three at least once in 2019. Zverev (No. 7) has battled slumps but made his first Slam semifinal at the 2020 Australian Open, won the ATP Finals in 2018 and boasts three titles at Masters-level events. And he’s only 23.

Better yet, there’s depth in this generation. There are 20 24-and-under players in the ATP top 50, and seven of them are 21 or younger. There’s no reliance on just one player to sustain a charge.

Djokovic has to win at least four more Grand Slams to hold the record alone, and it’s possible that, even if he remains the favorite for most Slams moving forward, the odds of winning any given one could be diminishing because the field of challengers is getting deeper. Advanced stats suggested at the beginning of the year that the Big Three might win only half the Slams in 2020-21.

There is a race-against-time element here, both in terms of how long Djokovic (and Nadal and Federer) can remain near peak effectiveness and how long before a new generation of players proves capable of actually scarfing up some Slams. Djokovic will likely retain the No. 1 ranking long enough to surpass Federer’s record, but winning Slams is a lot harder than the Big Three has made it look. Perhaps there’s still room to wonder about that one.

Cowboys’ Frederick on the reserve/retired list
Most NFL coaching staffs not yet at team facilities
We created the ideal NHL goalie: Bobrovsky’s butterfly, Rinne’s glove and more
Sources: Proposed end-of-Finals date is Oct. 12
Trevor Hoffman was a failed shortstop but a Hall of Fame closer