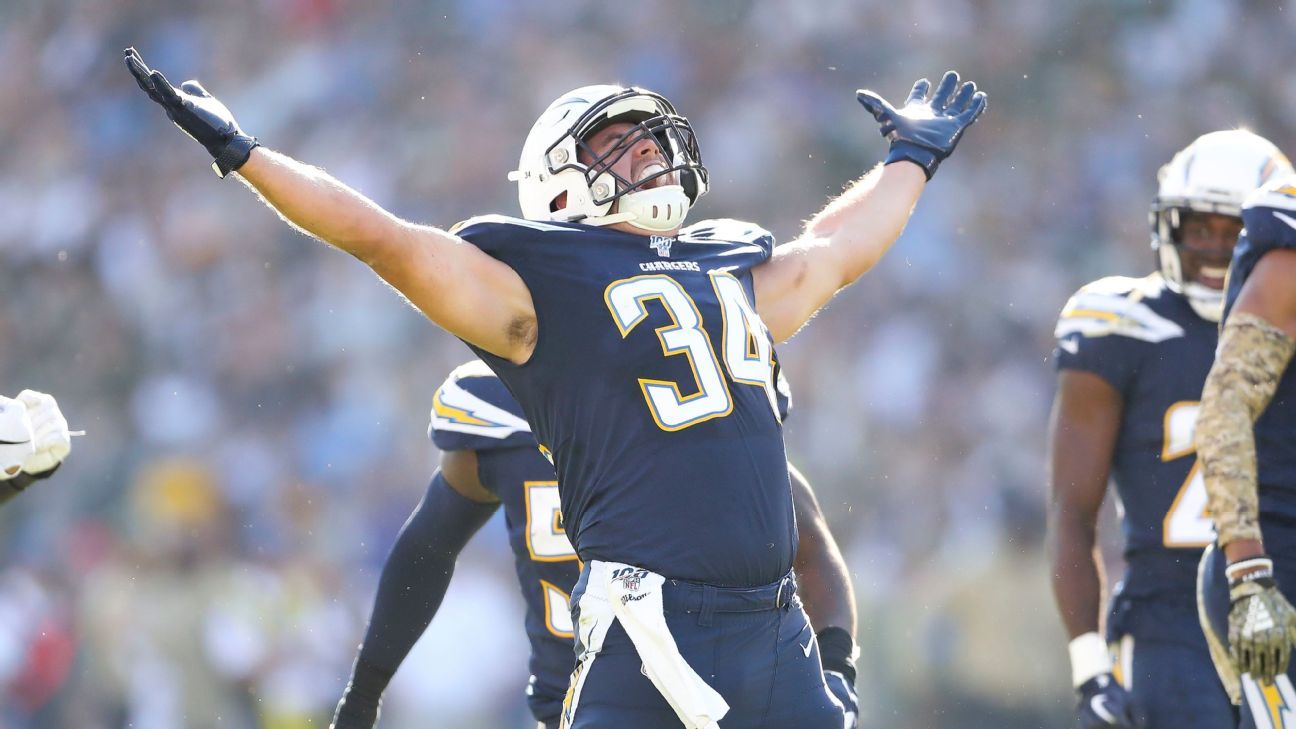 PITTSBURGH — A new Watt is coming to Pittsburgh, but he’s moving in from Los Angeles, not Houston.

Derek Watt, signed by the Steelers in free agency, had a smile in his voice when he acknowledged he might not be Steelers fans’ preferred brother to join linebacker T.J. Watt.

“I know I’m not the big, sexy signing that J.J. [Watt] would probably be, but I plan to do everything I possibly can to not let those fans down and just Steeler Nation as a whole, and do everything I can to help us win some games and bring another championship back to Pittsburgh,” he said by teleconference Thursday. “It would be something incredibly special for my family if we could all three, somehow, someway get together on the field in the same uniform.”

For now, though, just the two youngest Watt brothers will be suiting up in black and gold while big brother J.J. Watt cheers them on from a distance.

“J.J., he’s very happy for us because we get this opportunity,” Derek Watt said. “He’s always said that he’s envious of T.J. and I, we’ve had the chance to play together in high school, college and now the NFL. He knows how special that really is. He never had that opportunity. I kept missing him by a year. … He’s extremely happy for us. He’s jealous of the fact that we get to play together.”

The Steelers, though, were very interested in adding the fullback, not just for his versatility on offense as a run-blocker and pass-catcher, but for his special-teams prowess. In his final year with the Los Angeles Chargers, Watt earned a Pro Bowl alternate spot after racking up 17 special-teams tackles.

When the two sides agreed to the three-year, $9.75 million contract, Watt’s agents finally told him just how interested the Steelers were in signing him.

“The day that I ended up getting the offer and choosing the Steelers, they revealed to me that they were downplaying it a little bit because they knew how excited I would be for that opportunity to play with T.J. and to play for such a great organization,” he said. “They revealed that, ‘Hey buddy, all along, they were one of the teams all along that wanted you bad. They really respect your game.’ And they think it’s a great fit for me there.”

The fullback immediately called his wife and young son before making a second call to T.J. Watt. All three brothers are back home in Wisconsin, currently conducting their offseason workouts at J.J. Watt’s home after the COVID-19 outbreak forced them from their usual training facility and workout group of eight or nine other current and former NFL players in the area.

“I wouldn’t say it’s much of a downgrade going over there to work out,” Derek Watt said. “We’ve kept things entertaining.”

Though he’ll be moving to Pittsburgh, he doesn’t anticipate living with his brother.

“Once we get to Pittsburgh, I’m not going to say we’re going to be roommates,” Watt said. “He doesn’t want that. I know my wife doesn’t want that. It would be awesome, yes, but there’s a fine line between being around each other every single day, nonstop. So we’re going to look and hopefully get out to the area soon. It’s kind of crazy, wild with this coronavirus stuff just trying to keep everybody safe.

“We’re going to go about it cautiously, but try to find a spot. And if it can be close to him, the same neighborhood or surrounding area, then that would be great.”

Even if the Watt brothers aren’t living together, Derek did admit that T.J. has an edge in the race to become his young son Logan’s favorite uncle.

“He’s still a little young to grasp the situation fully, but T.J. definitely will have the upper hand now,” Derek Watt said. “If he somehow botches this and doesn’t come out on top as favorite uncle, that is 100% on him. He will for sure have more access and more opportunities to be around Logan and spoil him as much as he can.”