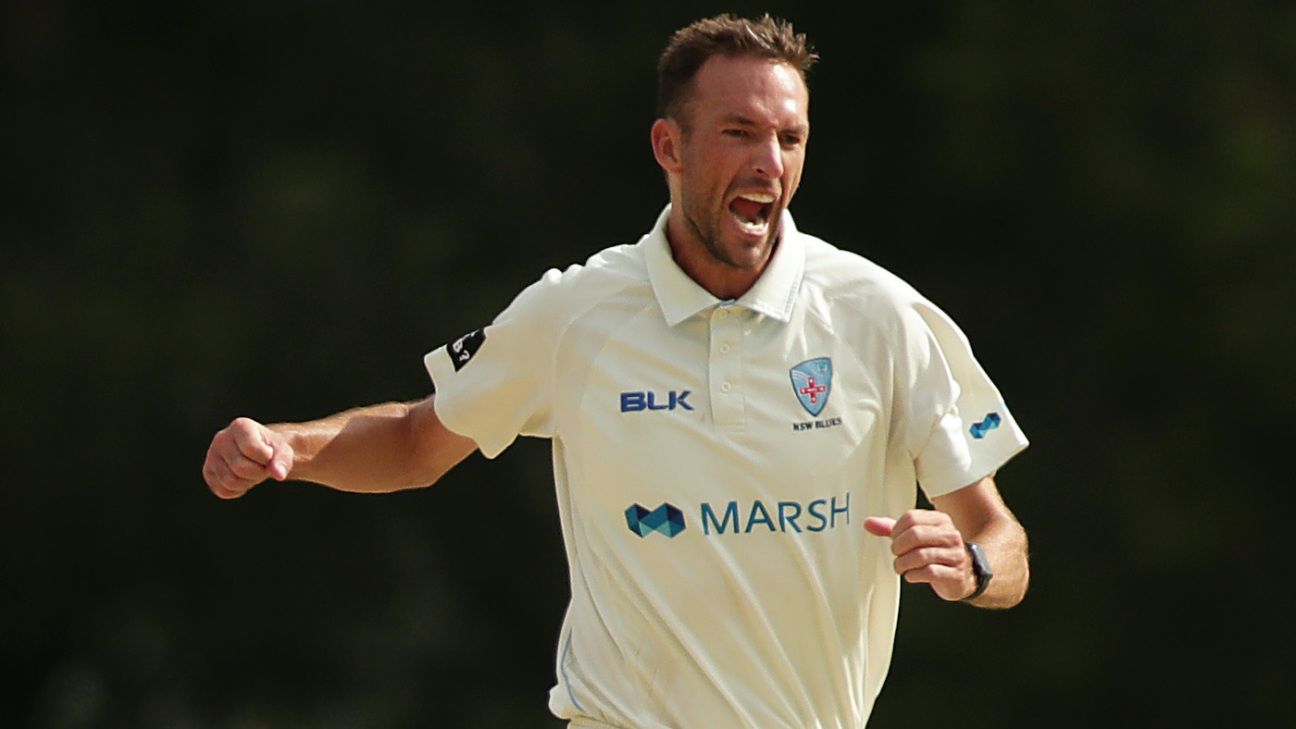 New South Wales surged to victory in the final session to consolidate their position at the top of the table as South Australia lost their last six wickets for 25 runs having put themselves in a position to salvage a draw. Trent Copeland completed a magnificent match as he burst through the lower order to add to the earlier key scalp of Travis Head to finish with match figures of 9 for 123.

After losing two early wickets to be 3 for 46, a stand of 95 between Head and Callum Ferguson steadied South Australia before Head was caught at long leg after a juggle by Liam Hatcher. Then Ferguson and Tom Cooper added 103 for the fifth wicket only for the innings to unravel when both players fell to the short ball from round the wicket by Hatcher. Copeland then got back into the act before Nathan Lyon wrapped up the victory by trapping last-man Lloyd Pope lbw.

Tim Paine was in the middle to guide Tasmania to victory as they chased down 235 to overcame Western Australia after Joel Paris had fallen seven runs short of a dramatic maiden first-class hundred. Paris had never passed fifty before, but added 64 for the last with Simon Mackin to lift Western Australia towards what could have been a defendable total. He was eventually bowled by Nathan Ellis who finished with 6 for 86 on his first-class debut.

Tasmania’s chase got off to a poor start as they lost Jordan Silk for a third-ball duck and at 3 for 60 Western Australia had a good chance. However, three consecutive 50-plus stands from Jake Doran, Ben McDemott and Paine steered Tasmania towards their target before Beau Webster capping a fine match, where he made 187 in the first innings, with 29 off 18 balls to seal the win.

Peter Siddle and Scott Boland took seven wickets between them as Victoria overcame a Joe Burns century and rain to secure a 44-run win at the Gabba. Burns and Lachlan Pfeffer had taken Queensland to 1 for 206 chasing 355 when Will Sutherland make the breakthrough with a brute of a delivery which climbed to take Pfeffer’s edge. Three overs later Burns was tapped lbw by Siddle to end a superb century and did not look thrilled with the decision.