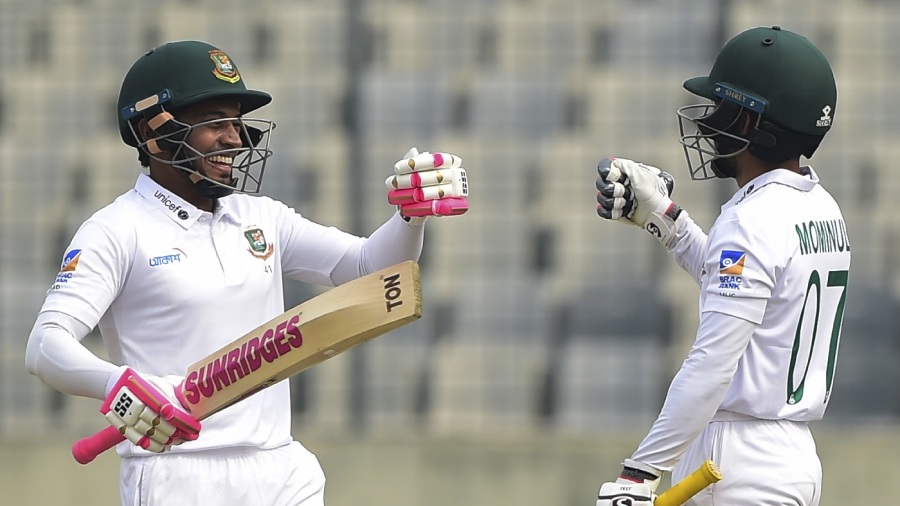 Bangladesh raced into the lead with a batting masterclass from Mominul Haque and Mushfiqur Rahim on the third morning. Haque raised his ninth Test century, his first as captain, and the first by a Bangladesh batsman in more than a year. Rahim followed close behind him, cruising to 99 not out as their partnership quickly assumed ominous proportions. By the time lunch was called, they had added an unbroken 179 in concert, with 111 coming in the first session at virtually a run a minute, and Bangladesh’s lead had swelled to 86.

Haque had done much of the hard work yesterday afternoon, and this morning his first task was to get himself back into the zone. It didn’t take too long, and after conceding a couple of overs to the bowlers he joined Rahim in launching an assault on left-arm spinner Ainsley Ndlovu, his rasping cover drive the coda to an over that brought 15 runs.

Rahim was soon scoring freely on both sides of the wicket, but he favoured the glide through gully as he found both the pace of Zimbabwe’s bowlers and the benign nature of the pitch very much to his liking. With the third-man boundary left invitingly open, Rahim twice dabbed Ndlovu down to the boundary there early on, and then repeated the dose against Victor Nyauchi to bring up his own fifty and raise the century stand.

At the other end, Haque took his team ahead of Zimbabwe’s first-innings effort with a controlled push through point – with only three wickets down, Bangladesh well and truly had a platform set from which to greatly extend their lead. The visitors took the new ball as soon as it was available, but if anything the hardness of the ball served only to galvanize the set batsmen.

Haque slotted the cleanest of drives through extra cover to raise his ninth Test ton, drawing level with Tamim Iqbal in that regard, and also equalling Craig Ervine’s captain’s knock: this is the first time in Tests that two players have made their first hundreds as Test captains in the same game. The feast of runs continued unabated with a boundary in virtually every over before drinks, and without much let-up in the scoring rate thereafter.

While Haque focused his attentions on scoring in the “V”, Rahim profited further still from the late cut and punished Zimbabwe’s bowlers whenever their line strayed. A powerful sweep off Ndlovu in the final over before lunch took him to 99 not out, but he was content to play out the remaining two deliveries and make everyone wait, knowing there would be plenty of time to gorge himself this afternoon.

More than 20 overs passed without a single maiden in the session, and with Haque and Rahim looking imperious Zimbabwe have been left increasingly bereft of options. The spectre of a mammoth stand this afternoon looms large.

The inside story of the first MLB player traded during the coronavirus pandemic
Lowe: How the Hornets are adding Kobe and playoff basketball to their break
Saunders’ license suspended following video post
‘Have to keep an eye’ on players and staff living alone – Justin Langer
USA Rugby to file for bankruptcy amid shutdown