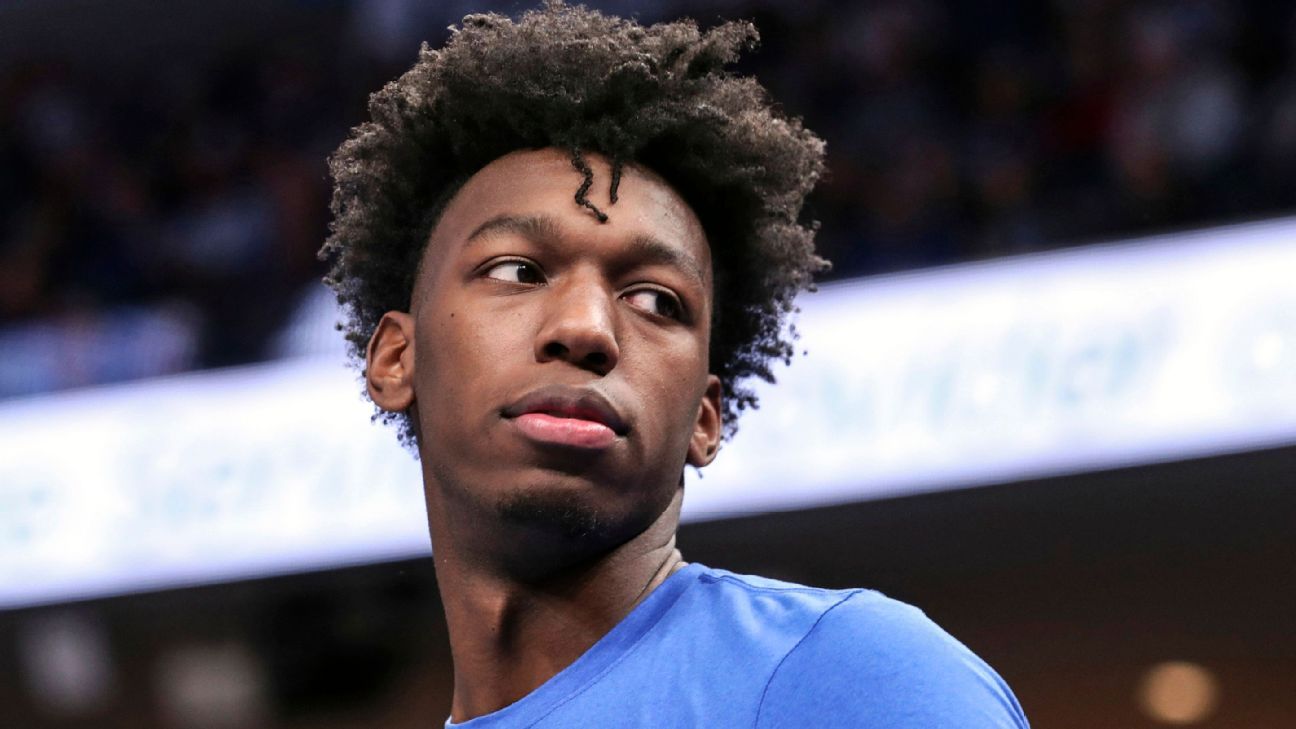 After leaving Memphis in December in the aftermath of an eligibility battle with the NCAA, potential No. 1 overall NBA draft pick James Wiseman described the saga as “heartbreaking” and said his NCAA punishment was “unfair.”

In his first interview since leaving school to turn professional, Wiseman told ESPN that he cried every night in his dormitory room during the turbulent episode with the NCAA, ultimately leaving school amid a 12-game suspension for rules violations that Wiseman insists he hadn’t been aware occurred.

“I was really in the middle of a hurricane,” Wiseman told ESPN in an interview that aired Friday. “That’s like the worst place you could possibly be. Just having the mental agony and the suffering, crying every night because I just wanted to get on the court so much.”

The NCAA punished Wiseman because his family accepted $11,500 in moving expenses in 2017 from Penny Hardaway — who was then the coach of Memphis East High School. While Hardaway didn’t accept a job at the University of Memphis and recruit Wiseman to campus until 2018, the NCAA deemed Hardaway a university booster at the time of the financial support. Hardaway had donated $1 million in 2008 to the university, where he had starred in the 1990s.

Despite the NCAA warning Memphis that it could face penalties that included forfeitures by playing an ineligible player after Wiseman had been eligible for the opening game, Wiseman and his attorneys won a temporary restraining order, which led to him playing two more games to start the Tigers’ season.

Wiseman eventually dropped the restraining order, and Memphis applied for reinstatement to the NCAA. On Nov. 20, Wiseman accepted a 12-game suspension that included repayment of the $11,500.

A month later, Wiseman announced that he would leave the team and school and turn his attention to preparing for the June NBA draft. Wiseman signed with Excel Sports for his professional representation and remains a strong possibility to become the No. 1 overall pick.

“I wanted to have a great collegiate career,” Wiseman told ESPN. “I wanted to win a national championship. But throughout the course of the first two games, everything started to go down in terms of my mental [well-being]. I was getting depressed. It was dehumanizing for me.

“I felt it was unfair because they notified and alerted me at the last minute. Coach Penny told me about it. I was really down and shocked. When I got suspended for 12 games and had to pay back the money, that was kind of surreal. I didn’t really have any knowledge of [the violation] or all the ramifications behind it.”

Asked why he had his lawyers drop the temporary restraining order that allowed him on the court despite the NCAA’s warnings, Wiseman said, “I didn’t want it to get worse in terms of it coming back on the institution, on the University of Memphis.”

Wiseman cited an inability to pay back the $11,500 and the threat of potential injury as reasons for ending his college career prematurely.

“It was a bit surreal because I couldn’t use a GoFundMe page that [ESPN’s] Jay Williams put out for me, obviously,” Wiseman told ESPN. “I couldn’t use any outside sources. I had to get [the money] on my own, and that was pretty impossible because I didn’t have the money. I was just a regular college student.”

As for deciding against returning following the suspension, Wiseman said: “You could also say injury risk. I just cared about my longevity and my future. I had to make a decision on my own, and my family supported me.”

Wiseman expressed disappointment over never getting the chance to pursue a national championship with his Memphis teammates.

After playing in the season opener against South Carolina State, Wiseman had to spend several hours in a Memphis courtroom pursuing a temporary restraining order so he could play in the Tigers’ second game against Illinois-Chicago. He arrived at the arena only minutes prior to the opening tip of the nationally televised game.

“I didn’t think that I was going to be in the courtroom that long,” Wiseman told ESPN. “So Coach Penny came in, trying to prep me up for the game, but mentally, I was just out of it. It really took a lot out of me. I got to the arena at like 6:30, or 6:45, and the game was at 7. … It reminded me of the AAU days when you’d come to a game 10 minutes early.”

Wiseman would play in one more game, against Oregon, before dropping the restraining order and eventually seeing his college career come to an end.

He said he spoke with an NCAA official during the investigation by phone in a university administration office. Asked what the official discussed with him, Wiseman told ESPN that the NCAA asked, “‘Did you take the money? Is Penny Hardaway actually a booster?’ Just stuff I had no knowledge of, especially when that $11,500 came out. I didn’t have any knowledge of that. Questions that were … false assumptions that really didn’t make sense at all.”

Wiseman said his relationship with Hardaway and his former Tigers teammates hasn’t suffered because of the scandal and departure.

“It didn’t change at all,” Wiseman told ESPN. “We have a great relationship. We go way back. … I didn’t want to leave my teammates. I wanted to stay at the University of Memphis. [But] the mental depressing coming from [all] of it, having to deal with the media every day, it was a lot of mess for no reason.

Wiseman has set up base in Miami and is working out twice a day in preparation for the June 25 draft. One historic player who shares a similar height, wingspan and left-handed shot has caught Wiseman’s attention as he prepares for the pros, he said: Hall of Fame San Antonio Spurs center David Robinson.

“I’m trying to gain some weight and keep my body healthy,” Wiseman said. “I study a lot of film. Anthony Davis. Dirk Nowitzki. Karl-Anthony Towns. A lot of players who can shoot the ball at my height. I’m working on my shooting mechanics, trying to get my shot right.”

As for the race to emerge as the No. 1 overall pick, Wiseman likes his chances.

“I truly expect that,” he said. “I trust in myself, in terms of my game and my skill level. I’ve just to keep working, keep grinding every day.”