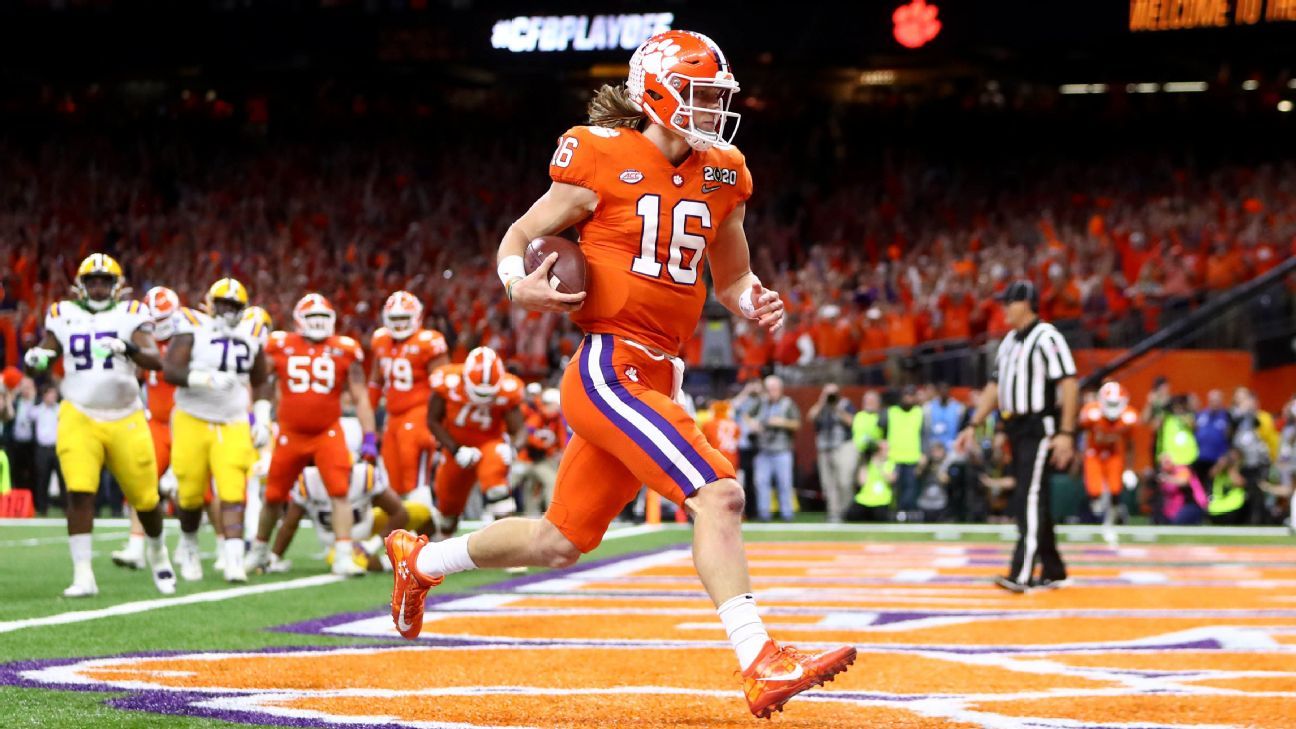 NEW ORLEANS — Trevor Lawrence sat at his locker with his full uniform on as the room around him emptied out. Co-offensive coordinator Tony Elliott sat next to him, offering reassurance and encouragement.

Only 30 minutes earlier, it was Lawrence who offered the same to his Clemson teammates, walking around to each one after a 42-25 loss to LSU in the College Football Playoff National Championship, hugging them and telling them he loved them.

It was their first loss in 30 games and the quarterback’s first loss since playing high school football in Georgia. Perhaps walking around that room and seeing all his teammates offered reassurance enough. Because make no mistake: Clemson expects to be right back in the national championship game next season in South Florida.

“There’s no doubt about it, we’re going to be back,” said quarterbacks coach Brandon Streeter, who will take on passing-game coordinator duties next season. “This is our fifth year in a row coming to the playoffs and four out of five coming to the national championship game. This is what we’re built for. That’s the expectations, and our kids love that, and we’ll respond to that.”

With Lawrence back for his junior season, Clemson will be the heavy favorite to make it to the College Football Playoff for a sixth consecutive season. The Tigers are already No. 1 in ESPN’s 2020 Way-Too-Early Top 25.

This is a program coach Dabo Swinney has built to last, and after completing the best decade in school history, there is no shame in looking ahead.

Swinney views the 2010s as transformative, and he vows that the 2020s will be even better. He already has dubbed them “The Roarin’ ’20s.” After all, his “Best is yet to come” mantra has become as much a staple to Clemson as the Tiger Paw and Clemson $2 bills.

“It’s true,” said offensive lineman Sean Pollard, one of the departing seniors on this Clemson team. “We just signed the No. 1 recruiting class in the country for the first time ever, so if that doesn’t prove his statement true, I don’t know what does. We have 80 freshmen and sophomores on this team that grew up very quickly, and now they’ve been in big games. They’re not young anymore, so that’s going to be a huge driving force next year.”

In the next few days, Clemson will await NFL draft decisions from four notable underclassmen: running back Travis Etienne, wide receiver Tee Higgins, linebacker Isaiah Simmons and cornerback A.J. Terrell. Simmons and Higgins are listed on the latest Mel Kiper Jr. Big Board, while Etienne and Terrell are ranked among the top 10 prospects at their respective positions.

Even if all four leave, Clemson returns talented players at every position. We saw glimpses of tight end Braden Galloway against LSU and the potential he could bring to the offense next season. The wide receiver group is loaded with players such as Justyn Ross, Amari Rodgers, Frank Ladson Jr. and Joe Ngata back.

Clemson returns two of the brightest young stars on the D-line in true freshman defensive tackle Tyler Davis and defensive end Xavier Thomas. The experience they gained throughout a 14-1 season, plus the way they played against LSU, will only serve them well.

After all, Clemson lost on this very field to Alabama in the 2017 College Football Playoff semifinals, then proceeded to reel off 29 straight victories.

“You see how we reloaded when we lost on this field,” said Higgins, who added he was not ready to announce a decision on his future. “I’m pretty sure we’re going to do the same thing. We’re going to come back next year and be even better than we were this year. We’ll be good next year.”

That all starts with Lawrence, who had his worst game in a Clemson uniform on Monday. Lawrence completed less than 50% of his passes and had 13 overthrows — the most by a Power 5 player in any game over the past two seasons. His 38.1 QBR is his worst in a game he played from start to finish.

Nobody could quite put a finger on what went wrong. As Lawrence struggled, the entire offense struggled, and Clemson converted a season-low 1 of 11 third-down opportunities. In a game in which matching or even beating Heisman Trophy winner Joe Burrow throw for throw was of utmost importance, Lawrence simply did not measure up.

“I wasn’t accurate tonight,” Lawrence said. “Didn’t put the ball where it needed to be, didn’t give my guys a chance enough, and it comes down to that really, giving them a chance, and I just didn’t do a good job of doing that.”

Dabo Swinney says he’s grateful for his team and how hard his players fought, but the better team won Monday in LSU.

While Lawrence was outside the locker room doing interviews, his teammates and coaches inside refused to put the blame on him. But they all agreed Lawrence would be a better player having gone through the adversity he faced Monday night.

“We’re right there, and let it slip away, but he is a guy with an amazing heart, and he has responded in every situation he’s ever been faced with,” Streeter said. “I told him, ‘There’s a part of you that wishes life was perfect, and we’ve been perfect for 29 games in a row, and this is just life thrown at you.’

“He’ll respond because it will put a little carrot out in his nose just by saying, ‘Hey, we’re going to go get it next year.'”

It has taken a decade for Clemson to build to this point and, at least right now, it seems as if there is no imaginable ceiling. Swinney had a vision to sell in 2010, but he has all the proof now. There appear to be no coming stumbling blocks in the weakened ACC, either, making the path wide open for the foreseeable future.

So the message in the locker room was simple. Swinney told his players to appreciate the magnitude of what they had accomplished, and though they wanted to put their heads down, there was no reason to. He challenged the younger guys. “You have the responsibility to uphold the standards we have at Clemson,” he told them.

Then he added one last thing: Spring practice starts in six weeks.

“Sooner or later you’re going to lose one,” Swinney said in his postgame comments. “This certainly wasn’t the one we wanted to lose, but I know how we’ll respond. We’ll get back to work. You can’t win two until you win one, so we’ll get back to work and see if we can come back and have a great year next year and really just try to achieve our goals. We’ve got five simple goals and they don’t change.”

Because Clemson has no plans to go anywhere. Not any time soon.