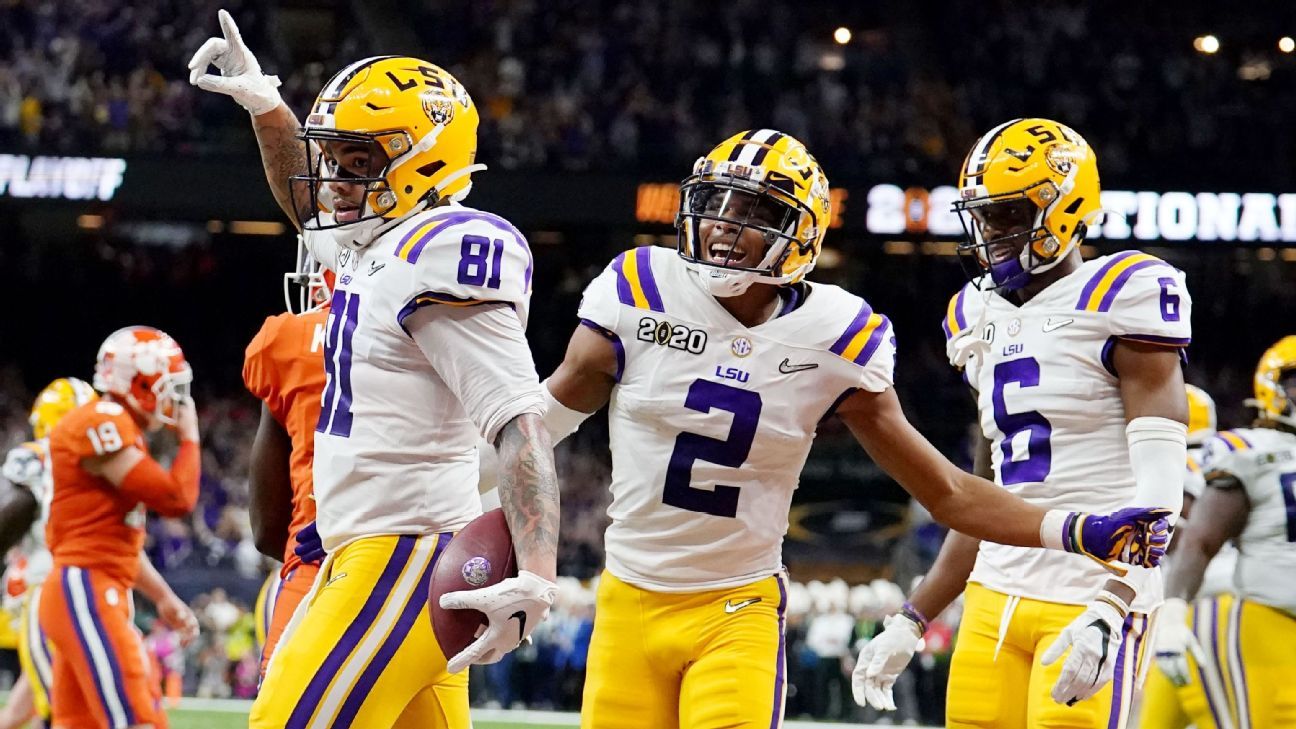 NEW ORLEANS – LSU tight end Thaddeus Moss can remember sitting in the stands at the Mercedes-Benz Superdome when he was in middle school, watching his dad, Randy, catch two passes for the 49ers in a 34-31 loss to the Ravens in Super Bowl XLVII. It was his father’s last NFL game, and as good as the Hall of Famer was, Randy Moss never won a Super Bowl.

Before Monday night’s College Football Playoff national championship game against Clemson, Thaddeus got a text from his dad, showing him where he was sitting in the stands – “maybe a section or two off of where I was sitting in the Super Bowl,” Thaddeus said.

He also got a pregame text from his mom, letting him know, “win or lose, we still love you. Everything is already written out.”

“But I was like, man, we can’t lose,” Thaddeus said he thought when the Tigers were trailing by 10 in the first half. “A Moss finally has to win something.”

With his family watching from the stands, Thaddeus Moss did his part to help it happen, scoring two touchdowns – as many as he had scored all season entering the game – in the Tigers’ 42-25 win over Clemson.

With about five minutes left in the third quarter, LSU had first-and-goal from the four-yard line when quarterback Joe Burrow found Moss on the far side of the end zone for the touchdown and a 35-25 lead that shifted the momentum in LSU’s favor. Randy Moss, wearing a purple LSU hat and purple and gold scarf, looked elated, giving out high fives to those around him.

“It’s crazy how everything comes full circle,” said Thaddeus, who finished with five catches for 36 yards. “That was his last football game, he lost the Super Bowl here, and I was able to win a national championship here and have a big game.

Earlier in the first half, Moss caught a six-yard touchdown reception from Burrow to give LSU a 28-17 lead heading into halftime. His success wasn’t a surprise to LSU linebacker Patrick Queen, who said he went one-on-one against Moss during spring drills and “couldn’t stop him.”

“To see him do that same stuff right now, I’m thankful to have him as a teammate and a brother,” Queen said. “He’s an aggressive tight end that can do it all. People try to put labels on him, but he can do it all.”

Moss, sitting in a metal folding chair in front of his locker in the bowels of the Superdome after the game, was surrounded by a thick haze of cigar smoke from his teammates as they danced and celebrated.

“Nope,” he said. “I’m straight. I just got done with a football game. I don’t want to smoke a cigar, I want to drink a water and go sit down somewhere.”

Thaddeus hadn’t even had a chance to see his father or the rest of his family after the game, but there will be plenty of conversations this week between the two of them as Thaddeus ponders his future with the NFL.

“I’m thankful to have a father that’s been in my life,” Thaddeus said. “He’s been a great role model, a great mentor. He’s always that strong voice when I need him to be. He’s always been there for me and always will be there for me.

“I have a big decision to make this week, sitting down and clearing my mind, resting my mind and resting my body and making the decision I have to make. Ultimately, it’s my decision, but I’ve already asked him and gotten his opinion. I have that in my head, but I’ll make my decision and he’ll play a big role in it.”

It was Thaddeus, though, whose role on Monday night gave the Moss family the big win they’ve been waiting for.