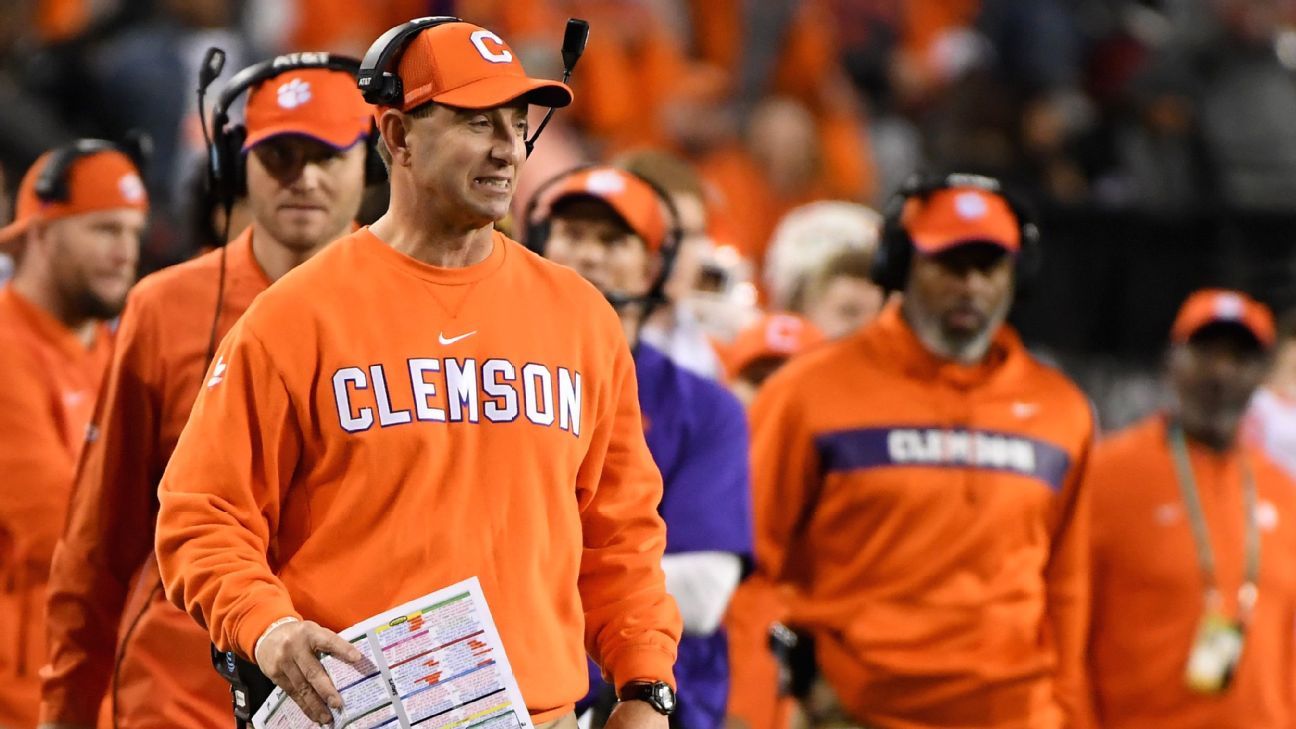 COLUMBIA, S.C. — Clemson coach Dabo Swinney, whose Tigers extended their winning streak to 27 straight games with a 38-3 rout of in-state rival South Carolina, suggested in one of his vintage rants that his team is being unfairly held by some to a different standard in the College Football Playoff race.

His voice dripping with emotion, Swinney said Saturday’s win was huge from a national standpoint because “Obviously, if we lose this game, they are going to kick us out. They don’t want us there anyway. We’d drop to 20 (had Clemson lost to South Carolina). Georgia loses to this very same team, and it’s, ‘How do we keep Georgia in?’

“We win, against the team that beat (Georgia), and it’s, ‘How do we get Clemson out?’ It’s the dadgummest thing.'”

Later, Swinney added facetiously, “We’ve got to go 30-0. We ain’t got no choice because we don’t play nobody.”

Clemson, No. 3 in the most recent College Football Playoff rankings, has won seven straight this season by at least 31 points going back to a 21-20 escape against North Carolina on Sept. 28. Clemson faces Virginia next week for the ACC championship, the Tigers’ fifth straight appearance in the conference title game.

Swinney said the ACC simply doesn’t get enough credit and that the Tigers are being penalized because they had one close game against North Carolina.

“It’s been that way all year long,” said Swinney, whose Tigers have won two of the last three national championships. “Some guy said the other day on the radio, ‘Y’all are pre-North Carolina.’ What season has (he) watched? It’s like, ‘You want me to agree with that?’ We’ve dominated 11 out of 12 games. Dominated. We’re not any different. There’s no pre-North Carolina. We just had one close game where we stunk. We turned it over, gave up a big play, but we won. There’s nobody that’s been more consistent than us.”

Clemson is the first team since at least 1996 to hold all 12 of its regular-opponents under 300 total yards this season and has scored 38 or more points in 10 of its 12 games.

“Again, our league doesn’t get enough credit,” Swinney said. “Maybe we need some of them ACC guys on some of them big network shows they have. Maybe we ought to put (former Clemson sports information director) Tim Bourret on there.

Swinney joked with the media before finishing his impassioned postgame press conference Saturday that he was giving them some “riveting” footage and B-roll, but emphasized that he wasn’t going to apologize for the Tigers’ schedule or their league.

“There’s some other weak leagues, as people say. How come they ain’t undefeated?”