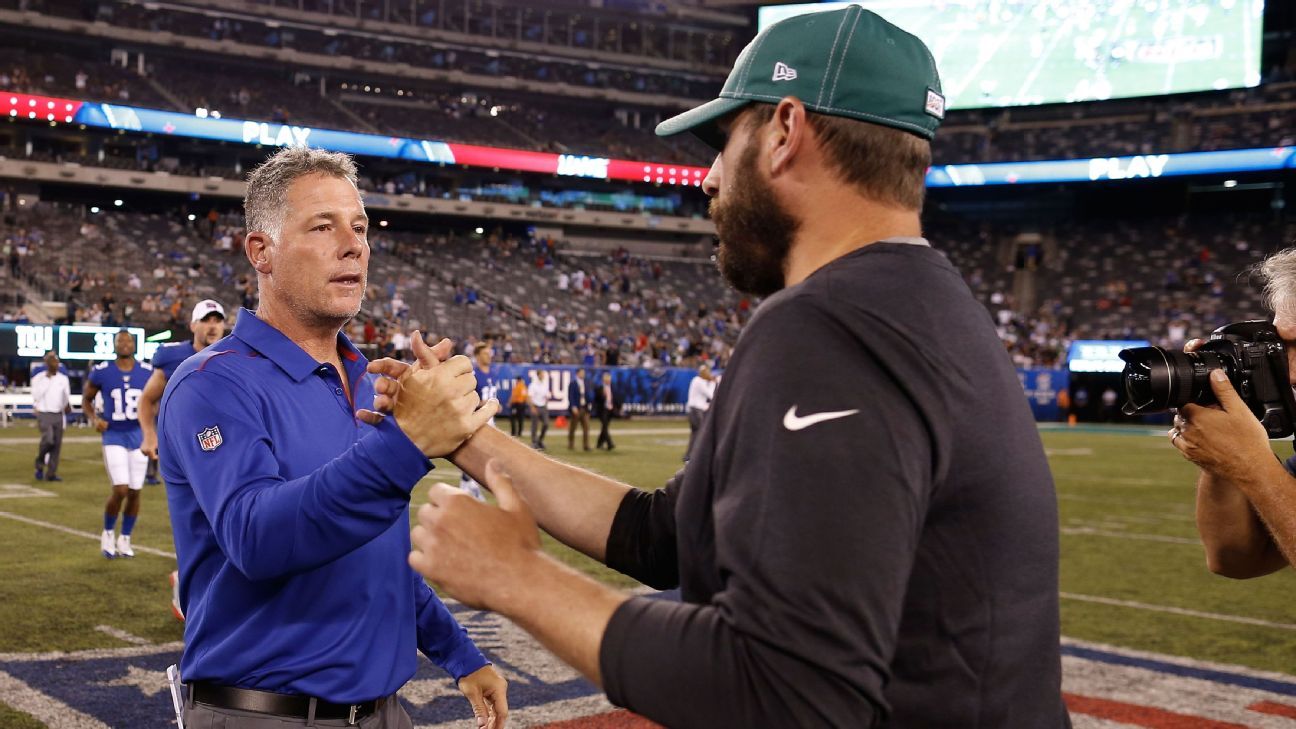 The black cat should have waited until Sunday to make its MetLife Stadium debut (1 p.m. ET, Fox). It would have been the perrrrrfect touch for a football game between the stadium’s coinhabitants.

The New York Giants and New York Jets are a combined 3-14, making this one of the sorriest seasons in New York football history. The .176 winning percentage is the second lowest in the history of the rivalry, covering 13 regular-season games. Both teams were 0-3 when they faced off in 1996.

This is a Jets home game, but the stadium figures to be a 50-50 split — and it could get ugly. Both fan bases are frustrated and angry, and there probably will be more than a few fans with green and blue bags over their heads. This will be a double-bag game.

Giants: Think the Jets have been bad? They might have the worse record right now and are coming off a loss to the Dolphins, but no team has more losses since the start of 2017 than the Giants. Top that! The Jets at least have some injury excuses for their defensive inconsistency. The Giants are devoid of premium talent on that side of the ball. It’s possible Leonard Williams (whom the Jets just dumped and had no interest in re-signing) became the Giants’ best defensive player by default when they traded for him last week. It shouldn’t be a surprise the Giants are bad. They have more than $60 million this season against the salary cap either earmarked to players not on the roster or who are stuck on the bench. That’s not good. Neither is being 2-7 or worse for the third straight season. The Jets can’t say that.

Jets: It hasn’t been this high since 1996, when the franchise bottomed out with a 1-15 season. It takes more than bad football to max out on the index, and the current Jets have obliged with a tragic comedy of misfortune. They’ve had illness (Sam Darnold), a killer injury (C.J. Mosley), off-the-field controversy (Kelechi Osemele) and a player-management feud (Jamal Adams). As for the football, they have been an undisciplined team that can’t score (eight offensive touchdowns) and gets blown out (five losses by at least 14 points). The Jets occupy last place in the AFC East, and that’s doubly alarming because one team (Miami Dolphins) is constructed not to win.

Giants: The pressure is building on Pat Shurmur. He needs to win Sunday or his future will become a hot topic. Those on the outside don’t realize the disdain that exists at the top of the Giants’ organization for their crosstown rival. Heading into the bye week on a six-game skid following a loss to the lowly Jets would undoubtedly spark a conversation about Shurmur at the end of the season. Shurmur might believe “he’s built for this,” but he needs to win some games over the final eight weeks and have quarterback-of-the-future Daniel Jones show progress to state his case. That could be Shurmur’s saving grace because he’s 7-18 since taking the Giants’ job and has the seventh-lowest winning percentage of all time among NFL coaches.

Jets: Adam Gase set a record: fastest coach to the hot seat. The fan base wants him out now, but ownership will try to be patient with Gase, who inherited a mediocre roster. On paper, the schedule should allow for a few wins, as their next five opponents have a combined record of 8-34. What’s more, the Jets could face rookie quarterbacks in three of the next four games — Jones, Dwayne Haskins and Ryan Finley. If Gase can’t get to four wins, it’s a big problem, which could result in a one-and-done.

Giants: This is seemingly the Giants’ lone hope. They have Jones, whom they are sold on as the franchise quarterback. The only thing that might hold him back is turnovers. Jones is tied for the league lead with 16 … in seven starts. What the Giants need beginning Sunday is for Jones to start showing signs of progress in this area. He can talk about improving his ball security and decision-making (which he does on a weekly basis), but until it happens, it’s an area of concern. What should work in Jones’ favor is he faces defenses in the bottom half of the league against the pass in five of the final seven games.

The show will stream live at 7:30 p.m. ET each Sunday during the 2019 season and will be available on demand each week until late Wednesday night. Watch on ESPN+

Jets: So much for the theory Darnold would take a giant leap in Year 2 under the tutelage of an offense-minded coach, a la Jared Goff and Sean McVay with the Los Angeles Rams. Darnold is mired in a three-game funk, although he did shows signs of breaking out last week (one ugly interception notwithstanding). The Jets’ remaining schedule is tailor-made for a struggling young quarterback, as the team faces five pass defenses ranked in the bottom half. The organization is “100 percent” committed to Darnold, according to general manager Joe Douglas. That probably won’t change, but a rebound would make everybody feel better in the offseason.

Giants: The Giants’ defense is devoid of premium talent. The team doesn’t have that defensive eraser or somebody who really scares opposing offensive coordinators. The fact that James Bettcher has this unit ranked ahead of four other teams should almost be considered an accomplishment. With three rookies and young players all over the place, the hope is the defense improves as the season progresses — especially on the back end where rookies cornerbacks DeAndre Baker and Corey Ballentine are playing key roles. It will help that the Giants get to face the 28th-, 30th-, 31st- and 32nd-ranked offenses down the stretch with the Redskins, Bears, Dolphins and Jets on the schedule. That should boost confidence and aid their development.

Jets: Statistically, the Jets have a middle-of-the-pack defense, a small miracle when you consider the personnel and injury issues. Despite major problems at cornerback and linebacker, the defense might be able to hang around because it faces only two more dangerous quarterbacks — the Raiders’ Derek Carr and the Ravens’ Lamar Jackson. Then again, the Jets couldn’t handle Miami’s Ryan Fitzpatrick and Jacksonville’s Gardner Minshew II, so you never know. Mosley could return late in the season, but it will be too late to change the narrative. Let’s face it, this unit will require a lot of work in the offseason.

Giants: The Giants seem destined for a top-10 pick for the third straight year and fourth time in five seasons. They could go in plenty of directions when they get there. Dire needs include edge rusher, middle linebacker, offensive line, No. 1 wide receiver and a lockdown cornerback. Fortunately for the Giants, this draft appears deep in offensive linemen and wide receivers if they don’t get a crack at the top pass-rusher, Ohio State’s Chase Young. Alabama wide receiver Jerry Jeudy, LSU safety Grant Delpit, Ohio State cornerback Jeff Okudah, Auburn offensive tackle Derrick Brown and just about every non-quarterback near the top of Todd McShay’s draft rankings would make sense for the Giants.

Jets: The Jets probably will be picking in the top six for the fifth time in six years. You have to believe Douglas will draft better than his predecessor, Mike Maccagnan. Ideal scenario: If the Jets can land the No. 1 or No. 2 pick, it would be the golden ticket. They could trade the selection to a quarterback-needy team and score a franchise-changing package of draft picks. If they come away with Young and a bushel of picks, it will be party time in the Big Apple. Alas, they probably will win one game too many and miss out on the blockbuster, as usual.

Ranking every No. 1 draft pick of all time
Virat Kohli: MS Dhoni played a big role in my becoming captain
From the Archives: A mini-oral history of JR Smith’s Finals gaffe
EA delays Madden ’21 event to help ‘drive change’
Weekes: NHL needs to get real about inequality