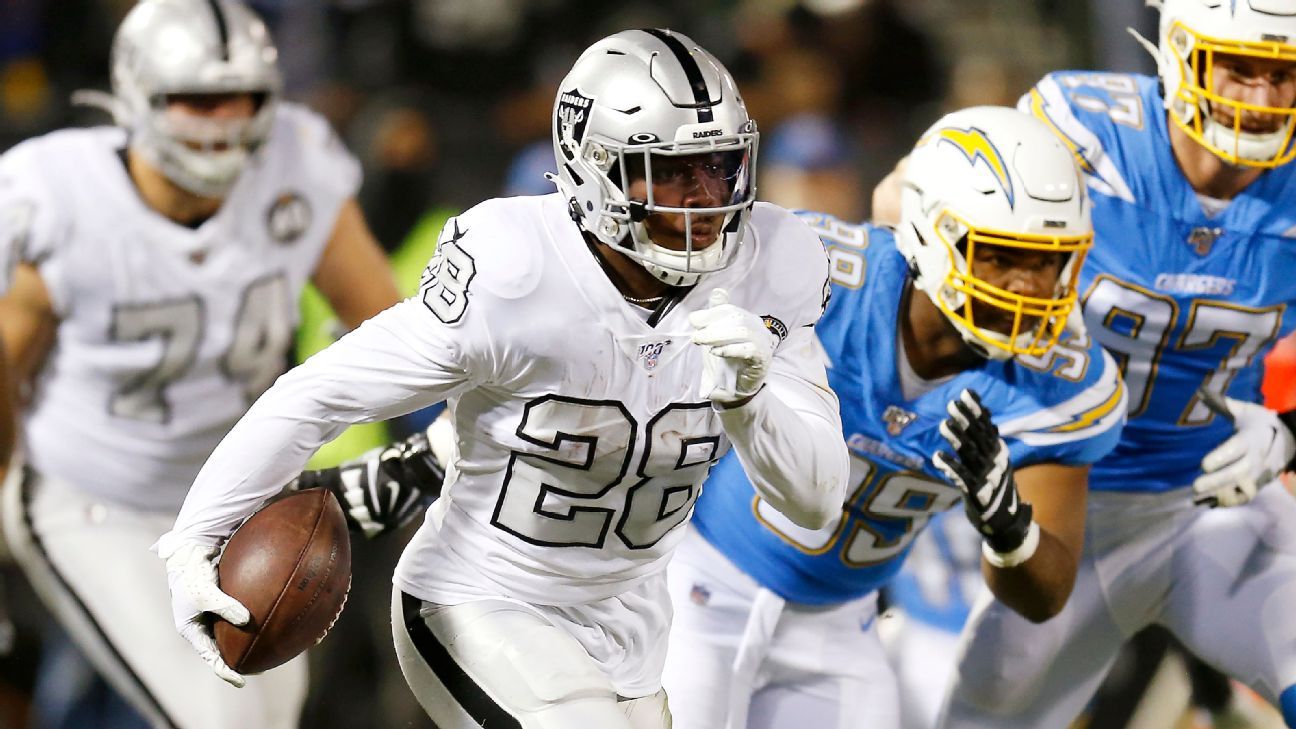 OAKLAND, Calif. — Who says youth is wasted on the young?

For the Oakland Raiders, it was on full display in a 26-24 victory over the Los Angeles Chargers on Thursday night. Rookie running back Josh Jacobs scored the winning touchdown on an 18-yard run with just over a minute remaining, his seventh touchdown of the season.

Consider: While undrafted rookie fullback Alex Ingold has six touches this season, all six have gone for first downs, including his first career TD. As such, 12 Raiders TDs have been scored by rookies thus far, double the next-closest team (Washington, with six) — Jacobs (7), tight end Foster Moreau (3), wide receiver Hunter Renfrow (2) and Ingold (1).

On this night, it was just enough.

Describe the game in two words: Slobber. Knocker. No matter the records, what other kind of game would you expect from these ancient AFL rivals, both of whom have moved at least two times, the Chargers from Los Angeles to San Diego to Los Angeles and the Raiders from Oakland to Los Angeles to Oakland to … Las Vegas?

Promising trend: Erik Harris, ballhawk? The Raiders safety picked off quarterback Philip Rivers on each of the Chargers’ first two possessions, including a 56-yard pick-six to give the Raiders a short-lived 10-0 lead. Earlier, he returned a pick 59 yards. Harris has a career-high three interceptions this season. Harris is the second player in the last 15 seasons with two interceptions, including a pick-six, in the first two drives of the game, joining the New England Patriots’ Brandon Meriweather in 2009.

Troubling trend: One game after rookies scored all four of the Raiders’ touchdowns in their defeat of the Detroit Lions, six of Oakland’s first eight penalties were committed by rookies, including defensive ends Clelin Ferrell and Maxx Crosby inexplicably lining up in the neutral zone three times combined. And while Ferrell was flagged twice, Crosby’s was especially galling as it negated an Erik Harris interception in the end zone — it would have been his third pick — and the Chargers scored a go-ahead TD on the next play.

QB breakdown: Derek Carr started slowly and seemed to hear footsteps early, footsteps that belong to elite edge rushers Melvin Ingram and Joey Bosa. Carr eventually steadied himself leading the Raiders on a 10-play, 75-yard drive for the winning touchdown. He finished 21 for 31 for 218 yards. He was sacked three times, twice by Ingram.

Seahawks’ Carroll: We all owe a lot to Kaepernick
The three reasons Mercedes blocked reverse grids
‘It’s 2020, ffs’ – Ricciardo angered by racism
Kap friend: ‘This is what we were talking about’
Kings announcer Napear resigns after BLM retort