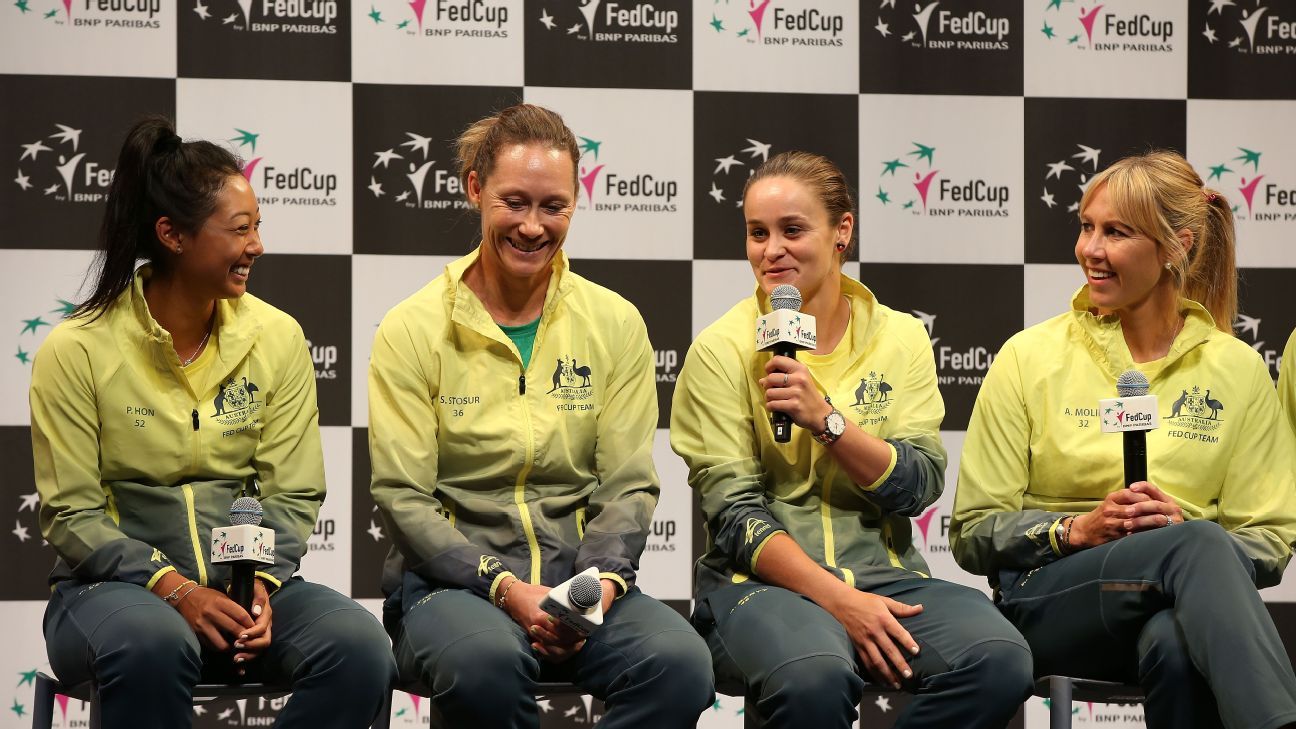 PERTH, Australia — World No. 1 Ashleigh Barty will step on court on Saturday with the chance to cap off her remarkable year by leading Australia to their first Fed Cup title since Evonne Goolagong Cawley in 1974.

Beginning her year in Perth at the Hopman Cup, Barty’s season will come full circle when she takes to the court at RAC Arena. After Australia’s eventual loss to Germany in January, Barty and her team will be hoping for a different result come Sunday.

It’s been 45 years since seven-time champions Australia last held the Fed Cup trophy aloft, with the Aussies failing to reach the final since 1993. Ending a 45-year drought would be a dream ending of Barty’s 2019 campaign.

Stepping off the plane on Tuesday morning just days after becoming the first Australian to win the WTA finals in Shenzhen since 1976 – where she also picked up the record $6.4 million (AUD) prize – Barty has had just days to regroup and focus on the weekend’s match-up.

“This was a week that I earmarked earlier in the year,” Barty told media. “Midway through the year I wanted to make sure that I was fit and healthy and doing everything possible to be right for this weekend.”

Australia’s No. 1 player, Barty will spearhead her team’s campaign for the title, with captain Alicia Molik naming Ajla Tomljanovic to make her debut as Australia’s second singles player, while Sam Stosur will pair up with Barty in the doubles if the tie gets to the final match.

Barty became Australia’s first women’s World No. 1 since Goolagong Cawley in 1976 and has been smashing records on her rise to the top in 2019, which has helped spur a revival of Australian women’s tennis.

With the most wins on tour (56), most top 10 wins (12), her first Grand Slam title, a WTA Finals title and the No. 1 ranking, Barty has easily been the standout Australian female performer in over a decade. But despite the titles and wins coming her way, the 23-year-old was quick to brush off any accolades.

“I don’t think I’m leading the way at all,” Barty said following the Fed Cup draw on Friday. “I’ve got someone sitting next to me right here [Sam Stosur] who has done that for so many years and has been at the very top of our sport.

“I think Australians in general, we have such a rich history across our sport and I’m just trying to do the best that I can, just to do what I do, I’m very lucky and very privileged to have the year that I’ve had and we’re really looking forward to finishing off as a team, all of our 2019 seasons.”

Currently unbeaten with a 6-0 record for rubbers this year, she became the first player to contest and win the maximum number of matches on the way to the Fed Cup Final in the competition’s current format, having claimed clean sweeps during Australia’s victories against USA and Belarus earlier this year.

Drawn to face Caroline Garcia in the second singles match on Saturday, with Tomljanovic to take on France’s first singles player Kristina Mladenovic, Barty will then face Mladenovic in the reverse singles on Sunday and will partner Stosur in the doubles if the tie has yet to be decided.

After such a memorable year and with a chance to add her name to further Australian tennis history, this is a weekend Barty will treasure.

“I know that I’ve got Mol [Alicia Molik] sitting on the court next to me in such a supportive and incredible captain and I think that knowing that all of our team is sitting on the side of the court it just brings out this little bit of a different side to me and it’s pretty rare and it doesn’t happen often. These are the weeks that I love – these are the weeks that I cherish,” she said.

“I think playing at a Fed Cup final at home is really precious and I think that all of us are going to make the most of it this weekend.”