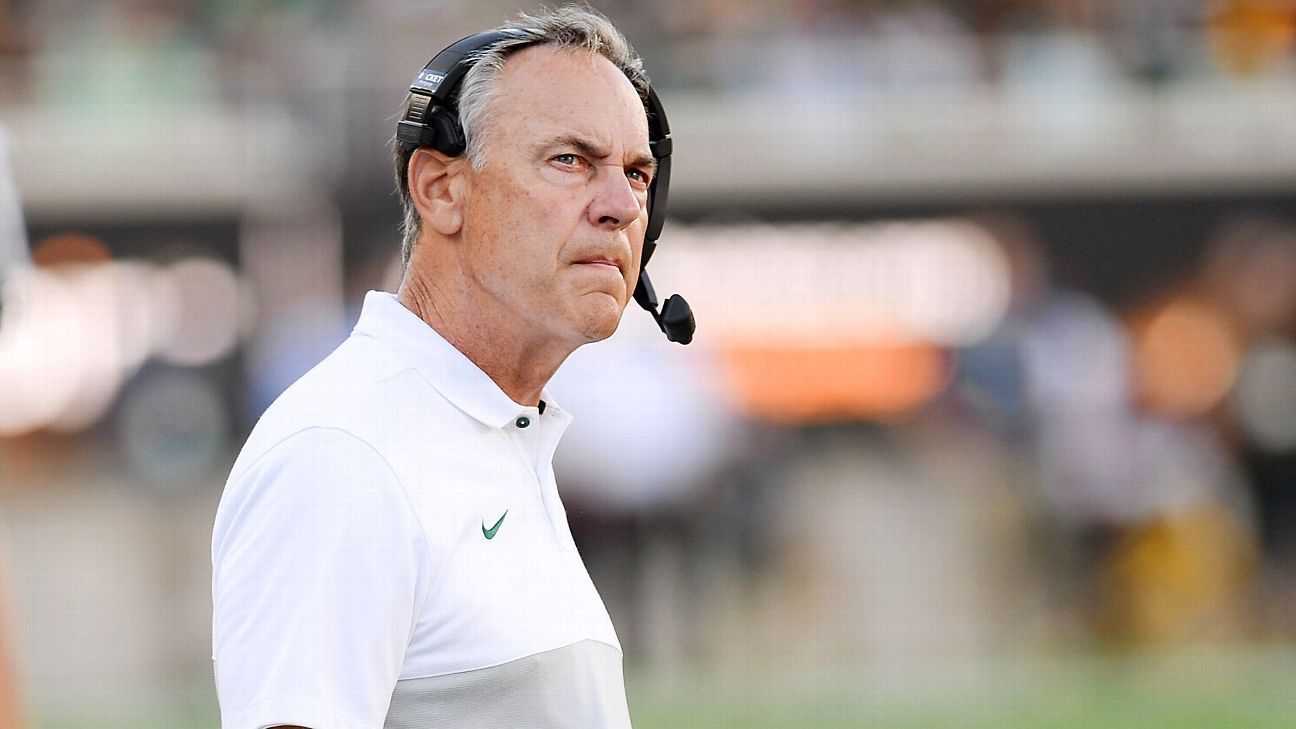 Michigan State head coach Mark Dantonio asked a judge Friday to rule that he didn’t have to answer questions under oath about the recruitment of former football player and convicted sexual assaulter Auston Robertson.

Dantonio released a statement through the athletic department Friday evening that said he does not plan to comment further on Robertson’s recruitment.

In a court record filed Thursday, a former staff member alleged under oath that Dantonio ignored the advice of multiple assistant coaches when he decided to bring Robertson to campus in the spring of 2016. One year later, Robertson sexually assaulted a Michigan State student, the girlfriend of one of his teammates, in her apartment.

Former Michigan State recruiting director Curtis Blackwell is suing Dantonio and others who used to work at the university for wrongful termination and unlawful arrest. Blackwell claims he was made a scapegoat during the spring of 2017 when the football program was facing public pressure due to a pair of sexual misconduct incidents that involved four freshman football players.

Blackwell was arrested in February 2017 on suspicion of interfering in one of the sexual misconduct investigations. He was not charged with a crime. He was suspended by the football program shortly after his arrest, and four months later his year-to-year contract was not renewed. A law firm hired by Michigan State later concluded that Blackwell was the only member of the university who violated university policy while responding to the sexual misconduct incidents.

“The fact that Mr. Blackwell’s contract was not renewed has nothing to do with Auston Robertson,” Dantonio said in his statement Friday. “Two years ago, I spoke at length about Auston Robertson when he was dismissed from the team in 2017. Rather than engage in a public argument with a former staffer, I refer you to those previous statements.”

Robertson, a highly-touted defensive end prospect, was kicked off his high school football team and later banned from the high school’s campus during his senior year due to a misdemeanor battery offense. Police said he grabbed and rubbed the groin of a female student against her will on school property. Court records show Robertson had a string of sexual violence allegations made against him in high school, including two women who accused him of attempted rape. He was not charged with a crime in those cases.

Blackwell said in his deposition that Michigan State’s coaching staff was aware of Robertson’s troubling history when they recruited him. Blackwell said he and two other football assistants who vetted Robertson as part of his recruitment told Dantonio that Robertson did not belong on Michigan State’s campus. Defensive line coach Ron Burton told Dantonio he didn’t want Robertson on the same campus as his daughter, according to Blackwell.

Dantonio released a statement in April 2017 when he dismissed Robertson from the football program. The statement said Robertson “underwent an extensive educational process” after he arrived in East Lansing. He also said Robertson went through “a thorough vetting, which we acknowledged publicly at his signing. This was a multiple-step process that continued through his final admission in the summer.”

When asked for more details about that vetting process by ESPN in the fall of 2018, Dantonio and others at Michigan State declined to answer. The university released a statement that said the school was only aware of two criminal complaints made against Robertson at the time he was accepted – the misdemeanor battery charge and a vandalism arrest from the same year. Dantonio declined to go into detail about Robertson when asked during a June 2017 press conference. When asked if he would change his recruiting tactics in the future, he referred to Robertson as “a risk.”

“We’ve never intentionally brought a guy in here and said, ‘Hey, that guy’s going to be a bad guy,'” Dantonio said. “Obviously, we took a risk as you said earlier. We vetted the young man.”

According to Blackwell’s deposition, then-offensive coordinator Dave Warner, who was involved in Robertson’s recruitment, told Dantonio that after talking to several people at Robertson’s high school he “couldn’t really find anybody that could say anything good about Auston.”

Dantonio’s statement Friday said multiple investigations into the program’s handling of sexual assaults “concluded that the program and myself committed no violations.” He referred specifically to a review conducted by the Jones Day law firm of how school employees responded to the sexual assault incidents that occurred in 2017. The scope of that report did not allow for Jones Day investigators to examine Robertson’s recruitment, only how employees responded after he was accused of raping a fellow student on campus.

Dantonio also referred to an NCAA investigation conducted in 2018. The NCAA did not formally investigate Michigan State, but determined after an inquiry that there was no reason to suspect the school had violated NCAA policy. There is no NCAA policy that prohibits recruiting a high school athlete with a history of sexual assault allegations.

Attorneys for Dantonio filed a motion Friday asking a judge to limit the amount of time and the scope of discussion that will take place in an upcoming deposition related to Blackwell’s lawsuit. In a statement sent to the Detroit News Friday night, attorney Tom Kienbaum said information about Robertson’s recruitment was not relevant to Blackwell’s suit.

“Mr. Blackwell’s publicity seeking efforts to nevertheless inject this and other irrelevancies into this lawsuit seek to deflect from what actually happened, and were already rejected by the court,” Kienbaum said. “We have filed a motion for protective order consistent with the court’s earlier ruling.”

Dantonio said in his statement Friday that “because the litigation is ongoing, I have no further comment on this matter and refer all questions to my counsel.”