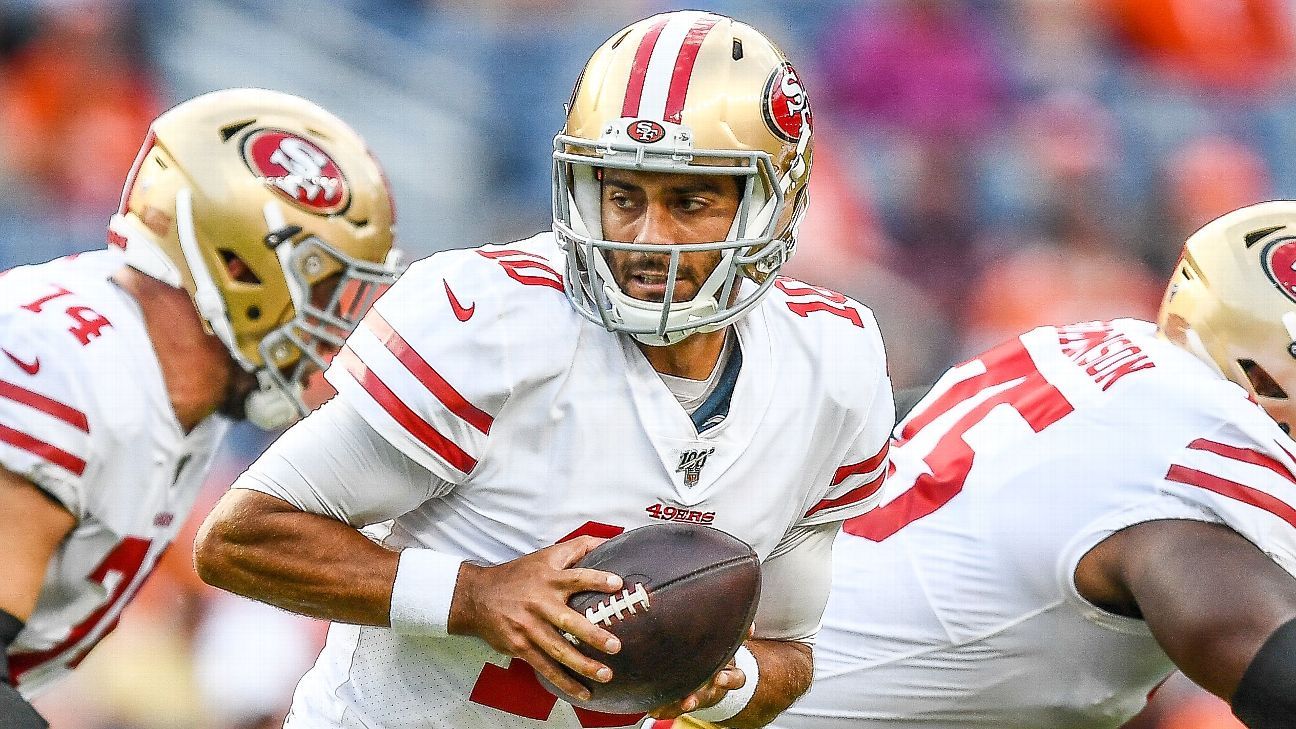 Before Saturday night’s game in Kansas City, San Francisco 49ers quarterback Jimmy Garoppolo made it a point to visit the spot on the field where he tore his left ACL on Sept. 23 last season.

For Garoppolo, it was a chance to reflect on an arduous rehabilitation and all that has followed, including a rough outing Monday night against the Broncos in which he posted a 0.0 passer rating.

“A lot has happened in the year since then,” Garoppolo said. “I thought it would be good to go back there just to remember everything that I’ve gone through.”

Apparently, that chance to remember was also what he needed to forget. Earlier this week, Garoppolo vowed that he would “stand up and fight” after his struggles in Denver.

On the heels of his pregame stopover, Garoppolo came out swinging and in the process alleviated some of the concern that followed him throughout the past week.

Garoppolo played the entire first half, a total of 37 snaps, and finished 14-of-20 for 188 yards with a touchdown and no interceptions for a passer rating of 116.2. In the process, he helped wipe away some of the residue of Monday’s game and the five-interception practice that preceded it five days earlier.

“It’s not a big surprise, I think, when a guy is out for a long time and especially coming off an ACL,” coach Kyle Shanahan said. “But that’s just how football goes sometimes, especially in the preseason. Last week wasn’t nearly as bad as it looked, but it definitely did look that bad live. And today everyone was on the same page a little bit better, we moved the chains a couple times, and you just get into a rhythm and you start forgetting about things and playing football.”

Garoppolo’s bounce-back performance just so happened to come in Arrowhead Stadium, where he suffered the knee injury that cost him the final 13 games last season.

On Thursday, Garoppolo acknowledged that it would be a bit “weird” being back at Arrowhead. Shanahan said it would be an “eerie” experience for his quarterback. Garoppolo also wanted to focus on erasing the Denver game.

It didn’t take long for him to get going.

After missing on his first throw and having another wiped out by a holding penalty on Kansas City, Garoppolo hit wideout Kendrick Bourne for 18 yards, the first positive gain on a throw for Garoppolo in this preseason.

“I thought it was good,” Garoppolo said. “It was a lot different than last week. Once you get the first first down you start to get into a rhythm. The run game was looking really good. I barely got touched. That makes everything a lot easier.”

From there, Garoppolo seemed to settle in. On the Niners’ second drive, he completed all four of his passes for 75 yards, including a perfectly placed pass down the right sideline for a gain of 33 yards on third-and-3. On the next play, Garoppolo floated a pass to the end zone down the left sideline that running back Matt Breida made a difficult diving catch on for a 20-yard touchdown.

Before his night was over, Garoppolo even took his first sack since the injury, as Kansas City’s Frank Clark dropped him for a loss of 7 yards to end the offense’s third possession.

Garoppolo and the first-team offense capped their final two drives with field goals of 29 and 35 yards from kicker Robbie Gould before handing over quarterback duties to backup Nick Mullens.

“Jimmy was pumped for today,” Shanahan said. “When guys don’t play well the week before and everyone is talking about it, all guys want to do is get back out there and it couldn’t come fast enough. I’m glad it worked out for him.”

Saturday’s start will likely be the end of Garoppolo’s preseason. Shanahan has previously said he does not intend to play Garoppolo or most of the starters in the preseason finale.

That means Garoppolo can start turning his attention to the real test in his return from the knee injury, the Sept. 8 season opener against the Tampa Bay Buccaneers. After Saturday, he can do so with the outside noise now turned down to a more reasonable volume.

“All the hearsay and whatever noise is going to go on, you have to ignore it and just go play football,” Garoppolo said. “I thought it was a good step coming back here to K.C., where it all started. So, just get that out of the way. It’s another step in the right direction.”